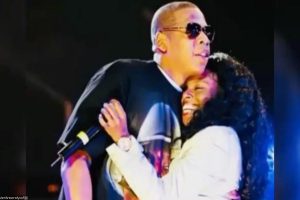 The ‘Na Na Be Like’ raptress claps back at social media users who speculate about her alleged romantic relationship with Hov after she posted birthday tributes to him.

AceShowbiz –Foxy Brown has been forced to set things straight about the nature of her relationship with Jay-Z. After social media users reignited her romance rumors with the “Girl’s Best Friend” emcee, the raptress shut them down via Instagram.

Foxy initially posted a birthday tribute to Hov on his 52nd birthday on December 4. Along with a cut of her song with Jay-Z, “Paper Chase”, and their throwback photo, she wrote, ” ‘GOOD DUDE You Know We Love You Like COOK FOOD.’ It’s Tha BIG HOMIE BIRTHDAY. RUN THIS ***H UP!”

A few days later, the member of hip-hop supergroup the Firm followed it up with an Instagram Story in which she thanked Jay-Z for helping her with her career. “Thank You Hovy For all the G that you taught me So my PEN be STUPID,” she penned over another throwback photo with Jigga.

While Foxy was speaking about their working relationship, fans were convinced there was something more between the two. Apparently the talks were so intense that it annoyed the “Oh Yeah” spitter. Returning to IG Story, she brought in Jay-Z’s wife Beyonce Knowles as declaring, “And I love B,” before adding, “Hop off my d**k.”

Her clarification, however, wasn’t enough to shut down the speculation. After her Story was reposted on The Neighborhood Talk’s account, people continued to express their thought about what might have happened between the two in the past.

“If I had him first was a person,” one person commented. Another claimed, “She was involved with him lol.” A third speculator added, “Jay Z definitely had relations with the then under aged Inga but since y’all worship Beyonce and her husband y’all won’t care,” and another chimed in, “they definitely was smashing back in the day ..”

Earlier this year, Wendy Williams fueled the romance rumors between Foxy and Jay-Z. “I remember, right, when Foxy and Jay-Z had ‘I’ll Be’,” she said on her talk show “The Wendy Williams Show” back in June. “Jay-Z was standing in the corner, ringing his hands talkin’ about, ‘Okay, what do I do next?’ All that. This was allegedly a romantical thing. It’s alright…I’ll say ‘alleged,’ you know we know. Yeah, she hit it before Beyonce. Allegedly!”