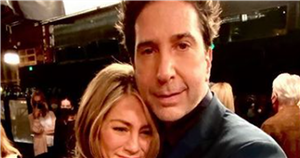 David Schwimmer has continued to delight Friends fans by sharing a snap of him cuddling Jennifer Aniston after they both admitted to having crushes on each other during the sitcom's filming.

In a post shared on Instagram on Monday, the 54 year old reflected on filming the hotly-anticipated reunion episode, which debuted last month.

In one of the behind-the-scenes snaps posted by the actor, Jennifer, 52, can be seen looking lovingly into the distance as David places a protective arm around her.

For ten years, the pair wowed fans with their unbelievable chemistry as on-off lovebirds Rachel Green and Ross Gellar.

And during the Friends reunion special, the pair admitted that their on-screen romance did almost transition into real life.

When asked by host James Corden if there were any off-set romances or flirtations, Jennifer turned to her co-star and said: "Err, well, I mean… David."

David then came clean about his feelings, admitting: "The first season I had a major crush on Jen.

"And I think at some point we both crushing hard on each other, but it was like two ships passing because one of us was always in a relationship."

He continued: "And we never crossed that boundary. We respected that."

And it seems the feeling was entirely mutual, as his co-star Jen added: "It was reciprocal.

"Honestly I remember saying one time to David, 'it's going to be such a bummer if the first time you and I actually kiss is going to be on national television'.

"[But] sure enough, the first time that we kissed was in that coffee shop. So we just channelled all our adoration and love for each other into Ross and Rachel."

As exclusive behind-the-scenes footage of Jennifer and David being affectionate in between takes played, David said: "I thought back on the very first year or two [and] when we had breaks from rehearsal, there were moments when we would cuddle on a couch."

He adds: "And I'm thinking, 'how did everyone not know that we were crushing on each other?'"

Courteney Cox and Matthew Perry, who played on-screen couple Monica and Chandler, admitted they both knew "for sure."