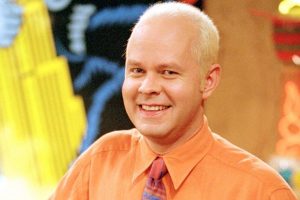 Friends star James Michael Taylor, who played Gunther in the hit series, has died at the age of 59.

According to TMZ, the star passed away peacefully at his home in LA on Sunday after a battling with stage 4 prostate cancer.

His family told the publication: "The world knew him as Gunther (the seventh "Friend"), from the hit series Friends, but Michael’s loved ones knew him as an actor, musician, cancer-awareness advocate, and loving husband." "Michael loved live music, cheering on his Clemson Tigers, and would often find himself in fun and unplanned adventures. If you met him once you made a friend for life."

He was first diagnosed with cancer in 2018 after a routine health check up, but kept it private for three years.

However, earlier this year, he opened up on his prognosis to NBC's Today Show, revealing the cancer has spread to other parts of his body, including his bones and spine and left his lower body paralysed. "I was diagnosed with advanced prostate cancer, which had spread to my bones," he said.

"I've been dealing with that diagnosis for almost the past three years… It's stage 4. Late stage cancer."

James explained doctors were optimistic when he was first diagnosed, but the cancer began to "mutate" at the beginning of the pandemic.

He said: "I missed going in for a test, which was not a good thing. "So the cancer decided to mutate at the time of the pandemic and so it's progressed."

The comedy series actor added the rest of the cast were aware of his diagnosis and said: "David Schwimmer has corresponded with me via Instagram.

"The producers are aware, they've been aware for a long time."

During the candid interview James heartbreakingly said his cancer will "eventually probably get me".

And when asked what he would do differently, he said: "Well I would have listened to my wonderful wife, who has been my absolute strength throughout all of this."

James then broke down into tears and added: "I would have gone in earlier and, you know, it would have been, hopefully, caught earlier."

He then urged viewers: "Next time you go in for an exam or your yearly check-up please ask your doctor for a PSA (Prostate-specific antigen) test – caught early [it is] 99% treatable."