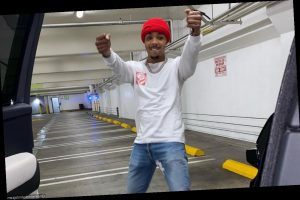 The ‘PTSD’ singer, along with his music promoter Antonio Strong and various other members of his crew, has been accused of defrauding numerous businesses with stolen credit cards.

AceShowbiz -Rapper G Herbo has been charged with fraud after allegedly running a lengthy four-year scam.

The 25-year-old, real name Herbert Randall Wright III, has been charged with one count of conspiracy to commit wire fraud and two counts of aiding and abetting aggravated identity theft in a new federal complaint.

In the documents, obtained by TMZ, Herbo – as well as his music promoter Antonio Strong and various other members of his crew – is accused of defrauding numerous businesses with stolen credit cards.

The “PTSD” singer allegedly contacted Strong to hire a private villa in Jamaica in July 2017, and provided a stolen card to pay for incidentals. Herbo is also accused of using a stolen card to buy two “designer puppies” from a luxury pet store, while the other defendants are alleged to have used stolen cards to charter private planes, yachts and cars, as well as hiring stunning rental accommodations.

Strong was arrested in September after being charged with several counts including wire fraud.

The charges come on the heels of Forbes naming Herbo among its 30 Under 30 2021 list in the music category.

END_OF_DOCUMENT_TOKEN_TO_BE_REPLACED

END_OF_DOCUMENT_TOKEN_TO_BE_REPLACED
We and our partners use cookies on this site to improve our service, perform analytics, personalize advertising, measure advertising performance, and remember website preferences.Ok