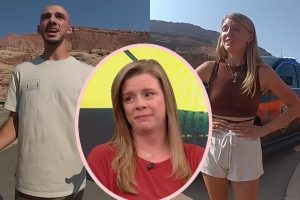 We hope this serves as a wake-up call for parents and loved ones of abuse victims out there.

While it’s still never been established for certain that Brian Laundrie was abusive towards Gabby Petito, the evidence is pretty overwhelming. The eyewitness who called the cops on the couple seemed sure that he saw Brian striking his fiancée. A park ranger on the scene determined this was a “toxic” relationship she was witnessing — not that it changed the decision to send them on their way with a warning…

Since the missing persons — and eventual murder — case made national headlines, experts have also weighed in and all seem to agree we’re looking at the worst result of an abusive relationship allowed to run its course.

But the couple were together for years before the cross-country road trip that left Gabby dead and abandoned in Wyoming’s Grand Teton National Park. So the question is, why didn’t anyone do anything about their relationship earlier?

The answer is sadly an all-too-common one. The red flags were overlooked.

“I don’t know why Gabby didn’t open up to me about certain things… We just didn’t see any red flags.”

Her stepmother, Tara Petito, added that she had even been in abusive relationship before marrying Gabby’s father, Joe Petito.

“I was young, I was 17. The isolation, that’s how it started. It wasn’t until he hit me that realized that I needed to get out.”

See that moment (below):

Now, however, with hindsight, Joe believes he does see that Brian exhibited classic abuser behavior. He told Dr. Oz.:

“The way that the abuser works is to shame the victim.”

That was the problem, he explained — offering insight on their own family tragedy. When abuse victims are shamed, he said, they won’t “go out and tell you what’s going on.” So everything stays nice and secret and allows the abuser to keep hold through silence. He continued:

“ continually shame the victim to where they start believing that shame is theirs to hold.”

Since Gabby’s passing, Joe and Tara have tried to spread the spotlight out to help find other missing girls and to lobby for better laws about missing persons databases and domestic violence. It sounds like Joe has worked to really educate himself on the subject.

Hopefully the family’s experience will help others to look for the red flags in their loved ones’ personal relationships.