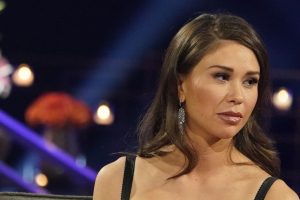 Clearly, this post contains spoilers for Season 19 of The Bachelorette, so turn back now if that’s a thing you’re avoiding.

If you were devastated beyond belief when Gabby Windey broke up with Nate Mitchell in Amsterdam during this season of The Bachelorette, then you felt pretty much how Gabby did during that particularly heart-shattering moment.

Gabby hit up the Click Bait with Bachelor Nation podcast this week to talk about the “Men Tell All” episode, including what it was like to see Nate again after the devastation—which led, naturally, to a conversation about said devastation. Grab some tissues and let’s dig in.

The topic was tackled head-on when Click Bait hosts came right out and asked Gabby the question that, TBH, has been on our minds since the Amsterdam episode aired: Does she have any regrets about the split (because…NATE)?

“Breakups like those are so hard because your heart and your head are telling you two different things,” she said (per Bachelor Nation). “You don’t know which one to go with, so you’re at odds with yourself. I have had breakups in the past where we broke up not because we didn’t have feelings for each other but just because we were at different places in life, whatever that may look like. I feel like those are the hardest.”

Okay, but *obviously* the breakup was hard (we know, we watched it happen). But does Gabby regret breaking up with Nate or nah? (Pro tip: Don’t keep reading if “nah” is going to destroy your soul.)

“I was a wreck for days because I was still processing, but ultimately, I feel like you have to trust your gut and I knew I had to make that decision for myself,” she added. “I really worked through things in real time. I got closure then. So seeing him again, I love him as a person and I’m so glad to see him happy, but I wasn’t like ‘Oh, I made a mistake.'”

^^ Proof that Gabby has a healthier outlook on the ending of this ‘ship than I do (especially since Nate is reportedly not going to be the next Bachelor).