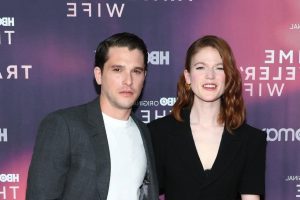 Kit Haringtonhas been photographed appearing clean shaven in a new look alongside his wife Rose Leslie.

The Game of Thrones actor, who played Jon Snow in the series, was snapped attending the premiere of HBO's The Time Traveler's Wife at The Morgan Library in New York on May 11.

His face was clean shaved as he ditched the facial hair which was synonymous with his character Jon Snow in the hit fantasy show.

Kit, 35, went for a smart casual look at the premiere wearing black trousers and a jacket with a white T-shirt and trainers.

He looked serious as he embraced hisScottish-born wife, 35, who was smiling in the picture.

Rose went for a more formal look and dressed from head to toe in black wearing trousers and a jacket over her top.

Kit and Rose fell in love while playing on-screen couple Jon Snow and Ygritte on Game of Thrones.

The couple dated before announcing their engagement in 2017 in The Times.

In the show, the pair’s characters became lovers in the storyline but were on opposing sides.

Speaking on theJonathan Ross showafter announcing his proposal to his co-star in 2017, Kit said: "We did a little announcement in The Times…

"I did have some plans to do it, I was going to string up some lights in some trees and do all the romantic stuff but we were in the country and we were under this beautiful night sky and had a log fire burning and red wine and I blew my load early.

"Sorry, that's a really bad expression. I was meant to do it the day after with the lights. What I meant to say was, I popped my question a bit early. Not blew my load."

It is thought that Kit is worth £12 million and he was reportedly one of the best paid actors in Game of Thrones.

The picture of clean-shaven Kit in New York is not the first time he has shocked fans by changing his look.

The actor gave his beard the chop in 2016 andsent the internet into meltdownwhen he was snapped without it.