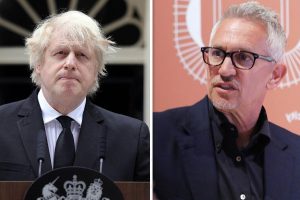 Former England footballer Gary Lineker insisted Great Britain was “determined to be the laughing stock of the globe” following reports that Boris Johnson, 58, would be standing in the new leadership contest for Prime Minister. The Match of the Day legend’s outrage comes after Liz Truss, 47, told the public she would be stepping down as PM earlier today.

This afternoon, Journalist Ragip Soylu tweeted: “BREAKING: Boris Johnson is expected to stand in the contest to replace Liz Truss as PM and believes it is a matter of ‘national interest’.”

An incredulous Lineker then replied: “We really do seem determined to be the laughing stock of the globe.”

Lineker shared a series of tweets with his 8.6 million Twitter followers shortly after Truss resigned and announced her replacement would be appointed in the space of just one week.

“Another Prime Minister resigns. Would you fracking believe it?” Lineker penned, making a quip about the chaotic vote on fracking that occurred in the House of Commons yesterday.

While Truss’s government won the key vote, the victory was overshadowed by claims that Tory whips had physically manhandled and bullied backbenchers into backing the Prime Minister’s administration.

Some MPs spoke of “total carnage” and “utter madness”, while others have called for an investigation to take place.

Labour’s motion, which sought to ban the controversial practice of fracking, was defeated by 230 votes to 326.

In another tweet, Lineker wrote: “We appear to have completely lost the plot. What a pickle we’re in.”

In another amusing tweet, Lineker attached a picture of his adorable Siberian Husky Filbert, who is a rescue dog from the streets of Los Angeles.

Lineker also made one final reference to the lettuce set up by the Daily Star next to a picture of Truss in a hilarious bid to see who would “last longer”.

The football star added: “It might be time to make the lettuce Prime minister even if it’s a romainer.”

Resigning after just 44 days in office, she will be remembered as the shortest-serving PM in British history.

A new leader is to be selected next Friday and some names have already been discussed for her replacement.

High-profile figures being discussed for the role include Johnson, former Chancellor Sunak, Leader of the House of Commons Penny Mordaunt and Defence Secretary Ben Wallace.

Jeremy Hunt, who was appointed as Chancellor of the Exchequer six days ago, has confirmed he will not be entering the leadership race.

Labour leader Sir Keir Starmer has insisted that there should instead be a general election, claiming: “They do not have a mandate to put the country through yet another experiment; Britain is not their personal fiefdom to run how they wish.”

“The British public deserve a proper say on the country’s future. They must have the chance to compare the Tories’ chaos with Labour’s plans to sort out their mess, grow the economy for working people and rebuild the country for a fairer, greener future.

“We must have a chance at a fresh start. We need a general election – now,” he added.