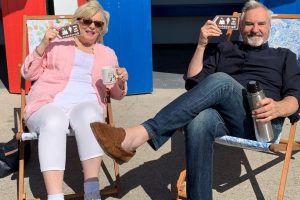 Gavin and Stacey fans have been sent into overdrive after spotting Pam and Mick filming at Barry Island.

Alison Steadman and Larry Lamb, who play Gavin’s parents, were snapped enjoying the sun near the beach as they relaxed on some deck chairs outside the beach huts.

And the sighting got fans excited that another Gavin and Stacey reunion could be on the cards.

Taking to Twitter one wrote: “Love Pamela’s cup. Fingers crossed for another spec or maybe season 4”.

“Better be a whole season and not just a special,” wrote a second alongside a series of crying emojis.

A third said: “I could scream”.

The most recent airing of the series came in 2019 when the Christmas Special ended on a dramatic cliffhanger after Nessa Jenkins (played by Ruth Jones) asked Smithy (played by James Corden) to marry her and viewers did not get to find out his answer.

Speculation of a new series or special has also been fuelled by the fact that James Corden confirmed he will soon be ending his LA-based chat show The Late Late Show and returning to the UK after eight years.

Calling it the “the hardest decision he’s ever had to make”, James said in a statement earlier this year: "When I started this journey, it was always going to be just that: a journey, an adventure. I never saw [the show] as my final destination, and I never want this show to overstay its welcome in any way.

"I always want to love making it, and I really think in a year from now that will be a good time to move on and see what else might be out there.”

He also told Deadline that he wants to do more writing, saying: “There’s still some other things that I feel I want to do.I’d like to try and write.

"There’s some [stories] I’d like to tell. I’d like to see if I’m capable of it. The fact that it’s terrifying is the reason to do it.”

James and Nessa actress Ruth created Gavin and Stacey back in 2007 and have written every season and special of the much loved series. Last yeat James also said that he didn't feel like the 2019 Christmas Special "was the end" and it would be a "shame" not to do more.

However, it is believed that Alison and Larry, who were also pictured outside Marco’s Café, were filming a documentary for ITV show DNA Journey.

One fan wrote: “I live in Barry, no other cast are here. Apparently it’s for DNA Journey.”

Either way Alison and Larry certainly looked thrilled to be back in Barry as they posed with souvenirs from local shop ‘Barrybados’ and waved at passing fans.

For all your updates on Gavin and Stacey, sign up to our daily OK! newsletter.