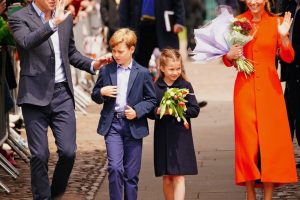 A body language expert has said Prince George and Princess Charlotte appeared to be "shy" as they arrived in Cardiff for a Platinum Jubilee engagement with their parents.

The Duke, 39, and Duchess of Cambridge, 40, decided to show the ropes of a royal engagement to George, eight, and Charlotte, seven, as they met several performers and crew taking part in a Platinum Jubilee celebration concert taking place in Cardiff Castle.

Both of the young royals appeared a lot more shy, compared to their usually colourful personalities, with the gravity of the occasion clearly having an impact on them – with Princess Charlotte only reaching out to shake hands after some encouragement from her mother, Kate.

Meanwhile, Prince George also appeared timid, ducking behind his father as he posed for a photo and held onto his dad's hand during the engagement.

Body language expert Judi James has looked into the young pair's behaviour, and how their parents are doing what they can to help encourage their confidence.

Speaking with FEMAIL, the expert said: "Both Charlotte and George also appear to have had training in the art of the royal smile.

"This is clearly a skill Kate excels in, but for small children the knack of faking facial expressions to be polite can be tricky, especially when they are in public and in front of the cameras.

"Both children seem to be trying their best though, even if their expressions do suggest some shyness behind the fledgling smiles."

Princess Charlotte, in particular, often shows her sassy personality – much to the delight of royal fans. She has been snapped pulling funny faces, waving to photographers, and even sticking her tongue out on family outings.

But with the gravity of the situation, both Charlotte and her brother needed support from their parents to help stay strong.

Judi continued: "After their often tense-looking appearances so far during the Jubilee it was a rather more relaxed and synchronized-looking William and Kate that arrived in Wales today with their two eldest children.

"With the tension of a rather boisterous balcony performance from Louis followed by an attempt to quash any signs of drama at St Paul’s, caused by the presence of Harry and Meghan, Kate and William were able to go into more of a parenting double-act here to show some of the non-verbal techniques they’re using to induct George and Charlotte into the formalities of royal visits.

"Their prime gesture seems to be to ‘anchor’ both children when they are on the move by holding onto their hands and even swapping the hand-holding now so that it’s not always George who gets to be next to his father.

"Charlotte often refuses the offer of a hand clasp, showing a sense of confidence and independence, but she looked happy to comply here. When they meet and greet with the public though the hands are dropped and both William and Kate use small touches and tie-signs on their children to signal cues and timings.

"Kate was seen to nudge Charlotte to step forward to shake hands after she jumped in too quickly at first, moving up before her brother and father had done their greetings.

"William placed both hands on George’s shoulders after he’d done his greeting to let him know he was still there behind him for steering and support. Kate tends to use hair-stroking comfort gestures to help the children feel confident and praised by her, making this as comfortable an experience for them as possible."

The pair later warmed up to the engagement, with help from their parents, and were pictured laughing together as they conducted the orchestra at the castle.

Missing from the scene was the youngest child, Prince Louis, who stole the show earlier in the week when he appeared at the Trooping the Colour ceremony on Thursday.

The youngest Cambridge child was spotted enthusiastically waving from the carriage as they made their way to the ceremony, and was later seen chatting with the Queen about the flypast.

In an iconic photograph, Louis could be seen shielding his ears from the loud fighter jets flying overhead in the formation of the number 70.

For updates on all your favourite celebs, sign up to our daily newsletter here .