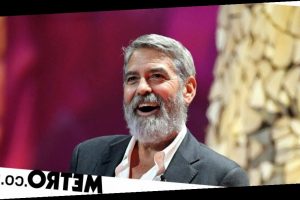 George Clooney has sent a special Juneteenth message to President Donald Trump and it was dripping with sarcasm.

The Hollywood actor made the diss in a statement to announce his $500,000 donation to the Equal Justice Initiative to celebrate Juneteenth.

Juneteenth – aka June 19 – is the date which marks the official end of slavery in the USA, when black people in Texas finally learned slavery had been abolished in 1865.

According to Deadline, the Ocean’s Eleven star’s statement read: ‘Thank you President Trump for “making Juneteenth famous.” Much like when Bull Conner made “Civil Rights” famous.

‘My family will be donating 500 thousand dollars to the Equal Justice Initiative in honor of your heroic efforts.’

It comes after President Trump moved his rally in Oklahoma to the weekend after originally planning to hold the event on June 19th.

Clooney’s message, and donation, came at a moment when the official end of slavery in the U.S. in 1865 is being widely celebrated.

Juneteenth marks the day in 1865 that Major General Gordon Granger arrived in Galveston, Texas, and announced the end of the Civil War and the end of slavery.

There have always been calls to make the date a holiday across all states in the USA, but with the spotlight being on Black Lives Matter means several stars have shown their support for it finally being made official.

Virginia and New York have joined Texas as the states that recognize Juneteenth.

Texas declared it a state holiday in 1980 and all except three states, North Dakota, South Dakota and Hawaii, have also adopted observance of the date.

The Black Lives Matter movement has been at the forefront of widespread conversations tacking the subject of racism, following the death of George Floyd in Minneapolis.

Ever since stars have been using their platforms to speak out against systemic racism, while calling for change and an end to police brutality.