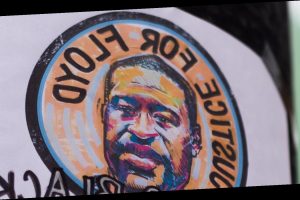 Courteney Ross, the girlfriend of the late George Floyd, is speaking out amid the protests in Minneapolis after he was murdered while being arrested.

In an interview with the Star-Tribute of Minnesota, Courteney, who had been dating Floyd for three years before his death, plead for peace.

Courteney said she wants the protesters “to know that I understand their frustration. … I want people to protest in a peaceful way.”

“I am heartbroken,” she added. “Waking up this morning to see Minneapolis on fire would be something that would devastate Floyd… He loved the city. He came here [from Houston] and stayed here for the people and the opportunities. … Floyd was a gentle giant. He was about love and about peace.”

A lawyer for Floyd‘s family said that they thank the protesters “for joining them in standing for justice, [but] we also cannot sink to the level of our oppressors, and we cannot endanger each other as we respond to the necessary urge to raise our voices in unison and outrage.”

Find out which Oscar-winning actor is in Minneapolis for the protests.