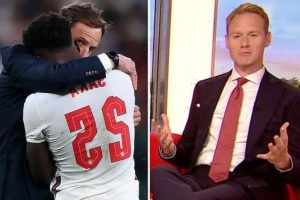 Following a nail-biting game, England and Italy went head-to-head in a penalty shootout in a bid to win the Euro 2020 trophy. Gareth Southgate’s Three Lions unfortunately lost to their rivals after the final penalty, taken by Bukayo Saka, was saved.

His fellow teammates Marcus Rashford and Jadon Sancho also didn’t manage to get the ball in the goal.

Since England’s defeat, the three players have been subjected to racial abuse online.

Dan Walker, amongst other celebrities, have spoken out to condemn the behaviour on social media.

Taking to his Instagram page today, the BBC Breakfast star shared a picture of the England squad having a group hug following their loss.

He went on to call out shameful trolls who targeted the young players.

Dan wrote: “I am sure I’m not alone in feeling far more annoyed/ashamed by some of the behaviour before & after the Euros final than the result itself.

“If your first response to a saved penalty is racist abuse then stop drinking, stop watching sport & get educated.

“This is on all of us. Win together. Lose together.”

In an earlier tweet, he commented: “If #EURO2020 has got you into football, it’s disappointingly familiar to be mortified by the behaviour of a small number of fooligans.

“It’s also normal to not allow the bruises of the past to crush your dreams that… one day… it could happen.”

Manager Gareth Southgate has also slammed the culprits behind the abuse.

He said in a statement: “For some of [the players] to be abused is unforgivable really.

“I know a lot has come from abroad. People who track those things have been able to explain that. But not all of it.

“It’s just not what we stand for. We have been a beacon of light in bringing people together in people being able to relate to the national team, and the national team stands for everybody and so that togetherness has to continue.

“We heal together as a team now, and we’re there for them, and I know that 99 per cent of the public will be as well.”

He added of his youngest player: “Bukayo in particular has been an absolute star in this tournament.

“[He has shown] incredible maturity and the way he has played has brought a smile to so many people’s faces.

“He’s become such a popular member of the group and I know he has got everybody’s support.”

Despite their defeat, England made history by making it to their first ever final at the Euros.

Their last major tournament win was at the World Cup in 1966.