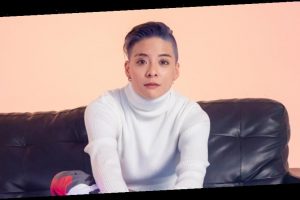 Amber Liu is already an established global superstar, and we want Just Jared readers to get to know her even better!

The 28-year-old Chinese-American singer-songwriter debuted in 2009 as part of the iconic K-pop group f(x), later embarking on a solo career in 2015 with her EP Beautiful.

She’s since collaborated with producers and artists around the world, as well as collaborating with stars on projects like the “Anna Kendrick Goes K-Pop with f(x)” Funny or Die sketch. She’s released several EPs and embarked on two U.S. concert tours ever since.

Amber Liu also has over 12 million followers across social media, and she uses her platform to advocate for female empowerment and mental health awareness.

Ahead of her forthcoming album, Amber just released her new song “Neon” on Friday (April 9) in two different languages, Mandarin and English.

Listen to “Neon” and check out these 10 Fun Facts about Amber Liu inside!

1. I am terrified of ghosts! During my 2019 U.S. concert tour, we had a show in Milwaukee and the venue was across from the Ambassador Hotel. The hotel has a giant, empty swimming pool in the basement that is supposedly haunted. After that show, I felt like a ghost was on the tour bus with me and the crew. However, I still love watching horror movies.
2. I love escape rooms and will drive up to two hours to get to the nearest escape room.
3. I was born and raised in the suburbs of Los Angeles, California. I was scouted at the SM Global Auditions in 2008 and debuted in Seoul in 2009 to pursue a career as a K-Pop singer.
4. Tteokbokki is my favorite Korean food! It is made from a soft rice cake, fish cake, and a sweet red chili sauce.
5. SHINee is my favorite K-Pop group. They’re my brothers and I love them very much.
Click inside to read the rest of the facts…
6. My nickname is Llama. It was given to me by fans. At first, I didn’t know what to think about it but I’ve embraced it fully.
7. I am a boba fanatic! My signature boba order is a honey lemon black tea with 50% sugar, no ice, double boba, and grass jelly.
8. I am an advocate for mental health awareness and female empowerment. In 2017, I released a video against cyberbullying called “Where’s My Chest?”
9. I have a black belt in Taekwondo and enjoy working out in the gym regularly.
10. I appear as a mentor on the Chinese reality TV music competition series CHUANG 2021. It’s my first time doing something like this, and I am enjoying sharing my knowledge and experience with the contestants.