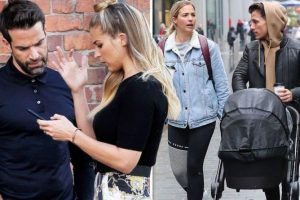 Morning Live host Gethin Jones, 43, has given an insight into what it was like to be involved in his friend Gemma Atkinson’s engagement to her Strictly Come Dancing beau, Gorka Marquez, 30. Gorka turned to the Welsh TV presenter for his assistance in selecting his fiancée’s engagement ring, due to his partnership with jewellery brand, Clogau.

However, Gethin soon realised that his role in the proposal had put him under “massive pressure”.

The One Show host revealed in an exclusive interview with Express.co.uk: “Because I work with the jewellery brand that I mentioned, he wanted some trusted advice, and so I was like, ‘are you sure I can help with that?’”

“But then, I felt this massive pressure.”

Gethin went on to admit he struggled to keep Gorka’s proposal plans hidden from his close pal and former colleague Gemma, 36.

The star recalled chatting to Gorka about popping the question while they worked together on Strictly spin-off It Takes Two last year.

He explained: “And the worst thing was, we would chat about it on a Friday on It Takes Two and we’d catch up over a coffee and, obviously, Gem’s a mate.

“So I’m bantering with Gem about all kinds of s**t and then it’s like, obviously I’m never going to spill.

Fortunately, Gethin managed to keep his lips sealed until Gorka got down on one knee and proposed to Gemma on Valentine’s Day this year.

He continued: “But it was so romantic and so lovely, and she messaged me after going ‘alright kid, you had something to do with this did you?’

“But fair play to him, he grafted on that, he’s a lovely romantic, a lovely boy.”

Gethin went on to detail how he feels like he’s been on the couple’s journey alongside them ever since Gemma fell pregnant with their two-year-old daughter Mia.

He continued: “The other thing that was really odd was that because I was working with Gemma on a radio station at the time, I basically went through the whole pregnancy with Gem, you know.

“All of the ups, and occasionally when she came in and she was feeling a bit ill and stuff like that, but the whole cycle really.

Detailing the fun the duo had with Gemma’s blossoming baby bump, Gethin added: “I remember, Easter, I drew a Cadbury’s Creme Egg all over her belly.

“It’s typical Gem, she’s such a salt of the earth legend, so it was just so lovely.

“We’re miles apart geographically, but being so close to them was lovely.”

When quizzed on how he’d feel if he didn’t get a mention in the couple’s future wedding speech, Gethin laughed: “I’d be fuming! I’d be absolutely fuming!