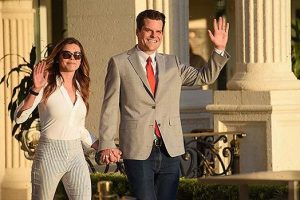 Amid the ongoing investigation against him for alleged sex trafficking, Matt Gaetz has married Ginger Luckey. Here are five things to know about the congressman’s wife.

U.S. Rep. Matt Gaetz of Florida is married. The politician, 39, who is currently under investigation for alleged sex trafficking, and his fiancée Ginger Luckey eloped in California over the weekend after dating for about a year. Both bride and groom shared snapshots from their big day on social media on Saturday, Aug. 21.

The nuptials come amid the ongoing federal investigation against the Donald Trump ally to determine whether he had sexual relations with a minor and paid for her travels. New court filings from last month revealed that the congressman’s campaign has been shelling out more spending amid the investigation, with half of which going towards attorney Marc Fernich, who has repped the late Jeffrey Epstein.

Within all the legal clamor and the clangor, the congressman has factored in time to exchange vows with Ginger, 26. Below are five things to know about the politician’s new wife.

Ginger told the Daily Mail last December that she met her conservative congressman husband at the former president’s Mar-a-Lago club — the same location in which he would propose — in Palm Beach, Florida in March 2020. Donald threw a fundraiser at the time, and Ginger said her mother “dragged” her to the event. The following night, Ginger accompanied her husband to the birthday party of Donald Trump Jr.’s girlfriend Kimberly Guilfoyle. Of the proposal, she told the outlet: “It didn’t come as a surprise. I had sort of seen it coming.”

Ginger Is A Student At Harvard Business School

According to her LinkedIn, Ginger is currently a student at Harvard Business School Online, where she is studying sustainable business strategy. She previously studied economics and accounting at the University of Santa Barbara between 2012 and 2016. Currently, Ginger works as a food analyst for the company Apeel in Santa Barbara in California. She’s been with the company since last year.

Ginger is the sister of Palmer Luckey, an entrepreneur best known as the founder of virtual reality company Oculus VR and designer of the Oculus Rift. Facebook bought Oculus VR back in 2014 for a reported $2 billion. Forbes estimated that the entrepreneur’s net worth was well over $500 million following the sale, but it is unclear how much he is worth now. He is also an ardent donor to the Republican Party, per OpenSecrets, a research and government transparency group that tracks money in politics. Last October, Palmer hosted a fundraiser for President Trump after having reportedly donating thousands to his 2016 campaign.

Don’t call the Luckey family’s support for Republican candidates a family affair, as Ginger’s sister Roxanne has slammed her now brother-in-law as a “creep.” Roxanne has been critical of the politician and the allegations of sex trafficking leveled against him, having shared TikToks that recounted stories about him. In one, Roxanne alleged that Matt tried to set her up with an older friend when she was 19. “I saw the character and type of person he is, and when everything came out about him, I honestly, unfortunately, was not surprised,” she said of the ongoing investigation. “As someone who has personally experienced a ton of creepy old politician men hitting on me when I was underage, and experiencing sexual assault at that age by people of power, it’s very disheartening and I have zero tolerance of people like [Gaetz].”

Ginger Doesn’t Live In The Same State As Her Husband

As her work information suggests, Ginger lives in California, while her husband resides in Florida. In her interview with Daily Mail, Ginger revealed that since her job had gone remote due to the ongoing COVID-19 pandemic, however, she has been traveling full-time with her “travel buddy” husband. “My company went totally remote in March so I can do my financial analytics from anywhere,” she told the outlet. “So I have been traveling with him everywhere. I am his travel buddy.”