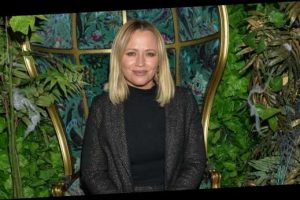 Kimberley Walsh has revealed her growing baby bump as she got stuck into a pregnancy workout.

Sharing a snap of herself wearing a matching black and white sports bra and leggings, the Girls Aloud star showed off a glimpse of her growing bump on Instagram.

Revealing working out has helped her mentally, the 39 year old captioned the shot: “I had to dig sooooo deep to do a work out today I’ve been so rubbish this week. Thought it might switch my mind set up a bit and it worked!”

Adding that she’s trying to keep her “strength up” during her third pregnancy, Kimberley continued: “Just did a pregnancy work out with weights to try and keep my strength up”.

The singer was glowing in the snap and looked incredibly fresh faced as she also offered a peek inside her living room.

Back in December Kimberley exclusively revealed to OK! magazine that she is expecting her third child with her husband Justin Scott. She and the singer, who recently celebrated their fifth wedding anniversary, are already parents to Bobby, six, and Cole, four.

Kimberley previously showed her fans a small glimpse of her bare bump and joked: “Why is my bum always in competition with my bump?! ….bumping along nicely #babynumber3”.

But her celebrity pals were quick to praise her, with Spice Girl Emma Bunton writing: “Gorgeous! X” while Vicky Pattison added: “And looking wonderful”.

Meanwhile, Kimberley’s Girls Aloud bandmate Nicola Roberts shared her sadness at not being able to spend time with her. “Can’t believe I don’t get to see bump in real life,” she wrote.

As she exclusively announced her pregnancy, Kimberley also shared her worries with OK! as she opened up about expecting for the third time.

She said: "The first few months are always a bit of a worry because you don't want to let yourself get too excited. There are so many problems that people can have and miscarriages are so common, so you're always fully aware that you might not make it to this point." "It's nice to get to this stage and think, 'OK, everything seems to be good," she said.

Kimberley went on to reveal that though she's experienced the highs and lows of pregnancy before, she actually found this third pregnancy more of a worry.

"It actually gets worse," she said. "The third time around you almost worry more, and you're older, so I think it meant more to get to this stage."

Sadly Justin wasn't able to attend her 12-week scan as he had to look after the boys who had to self-isolate due to a coronavirus outbreak at their school.

Luckily, her mum was on hand to step in for the special moment – but she says Justin was upset at missing out.

“We have to accept there’s going to be a few things like that thrown at us along the way,” she says. “If you have a baby in these times, it’s not going to be straightforward.”

Mark our words, this comfort-first boot trend is about to be everywhere

END_OF_DOCUMENT_TOKEN_TO_BE_REPLACED

‘We need representation because we are people too’: BBC makes history with first ever kids’ presenter with Down’s Syndrome as George Webster, 21, makes his […]