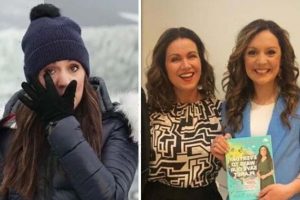 Good Morning Britain’s meteorologist Laura Tobin, 40, gave a poignant report about the effects of climate change when she flew to Svalbard, Norway, last year. The bulletin was shown live on GMB in September and Laura broke down in tears after witnessing how global warming had melted the glaciers and put polar bears in danger.

In the segment, she explained that Svalbard is heating up more than anywhere else on Earth and that the ice melting will cause changes to the weather in the UK, including rising sea levels and more flooding.

Laura’s voice started to break when she said her young daughter, Charlotte, five, had drawn her a picture of a polar bear. She sobbed: “If Charlotte comes here when she’s my age, there potentially won’t be polar bears.”

Despite the tearful report, some viewers criticised Laura because the flight to Norway would have added emissions to the atmosphere and contributed to climate change.

Speaking exclusively to Express.co.uk, Laura revealed that she turned to Susanna for support during the tough time.

She confessed: “Susanna is really supportive.

“When I was in Svalbard, I phoned her and told her what we had seen, the people we had spoken to. We discussed the criticism I received and whether I should mention it [on the show].

“We both agreed because we need to own what we are doing, where we are going and why.”

While Laura accepts that the flight would have made a carbon footprint and emitted pollution into the atmosphere, she doesn’t feel “guilty” because the benefits outweighed the negatives.

She stated: “The amount of people that watched, who maybe wouldn’t have watched an Arctic documentary, was in the millions. People were coming up to me saying they had watched it with their family and they were looking at how they live their lives.

“The emissions we saved with how people changed their lives far outweighed the negative ones. So I didn’t feel guilty about that because I know that overall it was a positive benefit for the planet and it opened up a conversation that people wouldn’t normally have had.”

Speaking on-air at the time, Laura also revealed she had not been abroad for “about 10 years” before her trip to Svalbard and clarified she “would never tell people not to fly” and merely suggests that they “fly less”.

It comes as Laura’s new book, Everyday Ways To Save The Planet, hits the shelves this Thursday.

Susanna joined Laura for the launch last week where they chatted about the simple changes everyone can make to do their bit for the environment.

Laura revealed when she approached Susanna to present the launch, the journalist agreed without hesitation.

She explained: “I like to chat, so I thought we need to give people the answers to the questions that they want to hear.

“I spoke to Susanna a while ago and told her that I would love it to be in conversation with her and she said, ‘Ok great!’ She is always really supportive.”

On the book itself, Laura says she wants “everyone to stop and think” about how we live our lives and overconsume.

She pleads: “If you just make one change a week, or one every day, the more you start doing the more you will want to do to lower your impact on the planet.”

Reader offer: Get £3 off Laura Tobin: Everyday Ways to Save the Planet (RRP £14.99, on sale April 7) with offer code RB5. Order online at mirrorbooks.co.uk