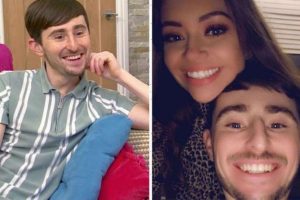 Pete, who appears on Gogglebox with his sister Sophie Sandiford, has married girlfriend Paige Yeomans.

The TV star said it was the second best day of his life, closely following the birth of his first child.

Pete told OK!: “I’m married now! It was nerve-wracking but the best day of my life.

“Well, second best day as I’m a dad now, too,” he quickly added.

Making the most of his child-free night, the new dad went on to say: “I’m buzzing [to be at the NTAs] as I got a full night’s sleep in a hotel so I’m well happy.”

He told the publication that fatherhood was “tiring”.

“The lack of sleep is not cool but it’s definitely worth it,” the 26-year-old said.

The fan favourite went to open up about his child for the first time.

“He’s basically a miniature version of me and Paige and that’s what I always wanted so I feel well lucky,” Pete continued.

It was back in April that he revealed the couple were expecting their first child together.

“Innit mad? I am actually going to be a dad to somebody,”(sic) the expectant father said as he presented a scan picture to Sophie while the cameras rolled.

Two months prior to that, he confirmed that he’d proposed to his girlfriend.

During an episode of Gogglebox, his sister asked “Do you feel any different now that you’ve got engaged?”

“I feel like an even bigger responsibility. I don’t know why. I’m going to have a wife,” Pete added.

“Yes, you’re going to have a wife,” his sibling replied.

Pete was at last night’s event, which took place at London’s O2 Arena, with his sister and co-star Sophie.

The pair took to the stage with fellow Gogglebox stars Julie and Tom Malone after scooping an award.

The programme, which they have been a part of since 2018, won the best Factual show accolade.

Pete looked dapper in a black suit while Sophie impressed in an elegant white gown with chiffon sleeves.