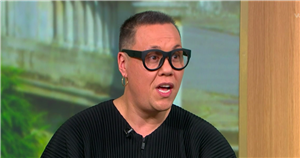 Gok Wan has shared the positive news that his cousin’s daughter, Alyssa, aged five, has undergone a bone marrow transplant after suffering with leukaemia.

The 47 year old previously revealed the brave young girl to be battling the disease and now, she has been able to continue on with treatment after finding a bone marrow match.

Posting a selection of photos of Alyssa in hospital smiling brightly on Monday 8 November, the presenter updated his followers with how she’s been doing.

“As many of you know, 5 months ago my cousin’s beautiful daughter Alyssa was diagnosed with Leukaemia. It has been a hideously scary time for her and our family,” Gok wrote.

“After rounds of unsuccessful chemotherapy it was decided that Alyssa would need a bone marrow transplant. The search was tough and there were no successful matches in the UK – BUT! A perfect was found in America and today our darling Alyssa starts her transplant.

“Alyssa read every single one of your messages to her in my previous posts. She absolutely loved them.

“I know these messages will be just the positive encouragement she so desperately needs. We love you Alyssa – Uncle Babe x.”

The fashion guru went on to say that he hopes this transplant for Alyssa will be the “beginning of her recovery”, championing the young girl for her courage moving into this next uplifting chapter.

In July, Gok shaved his head live on This Morning, raising over £50,000 for charity Young Lives Vs Cancer, bringing forward not only contributions, but awareness of the support needed for children fighting cancer.

Leukaemia is a cancer of the white blood cells, for which chemotherapy is used to combat. The treatment causes hair to fall out as a result which Alyssa experienced, spurring on Gok’s decision to shave his head.

“Alyssa wants to make it very clear that short hair can be cool,” he said on This Morning earlier this year before committing to the act.

Gok then emotionally read out a message from Alyssa on the show, that explained why she stood by his decision to shave his head.

"'I’m being brave. thank you so much for cutting off your hair to be like mine.’”

The presenter has continued to be vocal about Alyssa and the many other young people that battle cancer and hopes that in talking publicly it will “help so many people”.