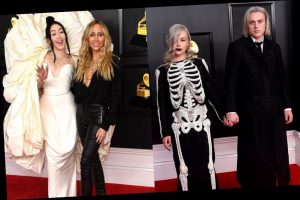 The ‘Stranger in the Alps’ singer is covered in black skeleton onesie while the ‘Make Me’ songstress makes a statement with her oversized white gown at the annual music event.

AceShowbiz -The 2021 Grammy Awards ceremony was finally held after being delayed from its initial January date. Besides the nominees and to whom the Grammys will be awarded, the red carpet fashion was, of course, the highlight of the event. Phoebe Bridgers and Noah Cyrus awere among those who showed iconic looks.

Nominated for four awards including Best New Artist, Phoebe Bridgers brought the spook as she dressed in skeleton costume designed by Thom Browne. Phoebe was covered in black skeleton onesie from studded pearls and crystals.

Meanwhile, Noah Cyrus came in what appears to be a fitted bed sheet. Nominated for Best New Artist, the sister of Miley Cyrus stepped into the red carpet with a bounteous white Schiaparelli Couture gown. To Giuliana Rancic as stated in Cosmopolitan, Noah shared, “I feel so honored to be able to wear this piece tonight.”

While she added that her mom described her as looking “like an angel,” Twitter has gone wild with her Grammys outfit choice. “Noah Cyrus dressed as my bed for the #GRAMMYs,” @vaughnramdeen tweeted. Another tweet from @dramabananna read, “You know that feeling when the alarm sounds at 7am in the morning and you just don’t wanna get out of bed? Well, that’s Noah Cyrus #GRAMMYs.”

Besides Phoebe and Noah, other stars were also there to impress. Miranda Lambert made a statement with her silver music-note-marking Genny gown, Alana Haim, Danielle Haim and Este Haim were all purple in custom Prada, and Julia Michaels looked stunning in Georges Chakra black strapless gown. Julia also earned compliment for normalizing body hair.