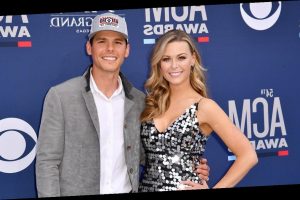 Granger Smith and his wife, Amber, shared some heartwarming news with their fans. The couple is expecting a baby baby in August. The news comes almost two years after the death of their 3-year-old son River.

“We’re pregnant. I don’t have many words for this video. Life isn’t perfect. Sometimes it’s beat up and broken but it’s NEVER hopeless,” the country singer wrote alongside a sweet family video on Thursday. “God promises that. Our story isn’t finished yet, and neither is yours! Through our suffering and joy, God’s glory radiates through it all! A new Smith boy is due in August 🙏🏼.”

In the video, Granger and Amber, along with their daughter London, 9, and son Lincoln, 7, send a message to River, who died in a drowning accident in June 2019.

Amber also posted the same sweet video, expressing her happiness and joy. “God has made a way we never thought possible. If I’ve learned anything over the last 2 years, it’s that I do not have as much control as I think I do,” she wrote in part alongside Bible verses. “Never did I think at 39 I would be blessed with expecting another baby boy. These past couple of years have been so rough but also so full of so much joy, hope, healing, growing and grace from God. “

“Lord, I pray that our story can speak life to someone else who may be suffering to never give up hope. To surrender their burdens to you. To trust you even when it hurts,” she added. “Sweet Riv, because of the beautiful life you lived, we are forever changed and we will continue honoring your big, little legacy until we come home to you. ❤️”

Shortly after River’s death, Granger explained that the accident happened while their kids were playing outside, sharing, “Somewhere between 30 seconds and three minutes [later] Amber and I are inside our pool gate doing CPR on our son.”

Following River’s death, the Smith family received an outpouring of love from both the country music community and Morgan Beck Miller, whose daughter, Emmy, also died by drowning.