Home » Celebrities » Gwen Stefani, 52, makes the most of the ’90s revival and looks identical to 20 years ago

Gwen Stefani, 52, makes the most of the ’90s revival and looks identical to 20 years ago 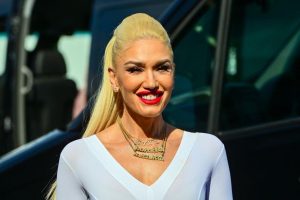 Gwen Stefani continues to defy her age as she looks stunning in her latest uber-cool look inspired by the 90s.

The No Doubt beauty recently turned 52, but she still looks like she's in her 30s, holding on to her flawless skin and signature platinum blonde locks.

The star donned an all-white outfit that showed off her ever-edgy style and svelte figure for her highly-anticipated GXVE Beauty line launch.

The mum-of-three and superstar singer, who married country music star Blake Shelton in an intimate ceremony in 2020, chose to make the event even more personal by holding it at her old favourite Italian restaurant Mama Cozza's, a cute joint in Anaheim, California.

Gwen shared a series of snaps and videos on her Instagram page Thursday to document the momentous occasion, as husband Blake Shelton also shared how "proud" he was for her new venture.

Posing outside the launch venue, the Don't Speak hitmaker and solo star opted for a fitted white V-neck top, that she tucked into a pair of ripped matching jeans.

The garment looked just like some of the jeans Gwen used to wear on tours and and during concerts in No Doubt's heyday, as it even featured metal rings hanging from the belt loops.

The star added even further throwback touches with a studded cream mini belt, and enough gold bangles stacked on her wrists to hear her coming a mile away.

Sweeping her long silky tresses into a high ponytails backcombed into a rocky look at the front, Gwen completed her ensemble with a pair of incredible cream heeled cowboy boots, and her ever-present bright red lipstick.

The star has maintained her youth throughout the decades with the same glamorous makeup and hip clothing style.

Ever since band No Doubt's first big break onto the Ska scene in the early 90s, with the likes of Just A Girl, Don't Speak and Spiderwebs shooting to the top of the charts, the ageless beauty cemented herself as a music.

Back then, she also chose to ignore the current styles and trends and kept her own bold look and individuality throughout her career, always one step ahead of the crowd.

Taking her fans down memory lane at the GXVE makeup event, Gwen was excited to show everyone Instagram some locations important to her life growing up.

With her brother Todd Stefani in tow, the gorgeous mum-of-three pointed out where they used to eat together as teenagers, as well as some nostalgic snaps of her on the wall.

As fans caught glimpses of the images, Gwen proved how she was a performer from day dot as she showed off her moves in one framed photograph, while in another the star posed for a black and white headshot.

Barely able to control her excitement for the new project, which finally sees Gwen share some of her beauty secrets from over the years with her own signature scarlet lipstick in the range, she told attendees that it was a "dream come true".

Sign up to our daily newsletter for the BEST celebrity house tours and BIGGEST exclusive interviews. Download OK! magazine's FREE app and get all the latest gossip straight to your phone

"I feel like every single thing I've ever done in my entire life — and I'm speaking from my heart and my truth — it has led to this moment," the star shared according to PEOPLE magazine.

"This is where it all started. I grew up here in Anaheim. I felt like, because this feels like definitely the next chapter of my life, and I've prayed about this…"

"The thing is, is that I don't know why I didn't do this sooner, but I don't think I knew that it was even a thing that you could do back in those times," Gwen continued. "Like in the '90s, we did music. And we did that for nine years before we were on the radio.

"Like we were never trying to do anything. We were just being who we were," she added.

For updates on all your favourite celebs and TV shows, sign up to our daily newsletter here .