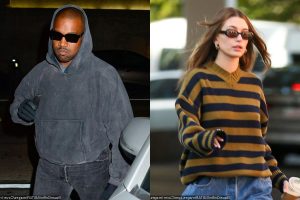 Just hours after the rapper/designer accused the model of getting a nose job, the wife of Justin Bieber looks unbothered as she is seen all smiles while attending an event in West Hollywood.

AceShowbiz –Hailey Baldwin is unfazed by Kanye West‘s social media attacks on her amid Paris Fashion Week controversy. Just hours after the rapper/designer accused the model of getting a nose job, she was all smiles during a sighting.

On Thursday, October 6, the 25-year-old runway beauty was seen attending a Lacoste event in West Hollywood, California. She looked chic while donning a blue blazer by the same label with matching pants and a deep blue bandeau. Completing her look, she had a dark green Lacoste handbag with her.

At the event, Hailey showed off her big smiles, hinting that she was not bothered by her feud with the Yeezy designer. He took a jab at her after she showed support to Vogue contributing editor Gabriella Karefa-Johnson, who criticized Ye’s controversial “White Lives Matter” design that he introduced at Yeezy Season 9 runway show during PFW.

“My respect for you runs deep my friend!” the Rhode founder said of Gabriella on Instagram Story. The wife of Justin Bieber added, “To know is to adore you and to work with you is an honor. the most kind. the most talented. the most fun. the most chic.”

In another post, he shared a screenshot of an article about Hailey’s support to Gabriella. “Wait Am I canceled again???” the musician wrote in the caption. He then mocked the “Ghosts” hitmaker, saying, “Justin please let me know.”

Ye further defended his “White Lives Matter” design in a lengthy message. Calling the people giving them “all the attention” from fashion week “programmed sheep,” he also slammed Gabriella once again. “Those boots Gab was wearing were f**king traaaaash,” he mocked the fashion editor. Concluding his lengthy message, he took aim at the Biebers and John Legend, “But I’m sure John Legend still wants a pair and Justin get your girl before I get mad.”