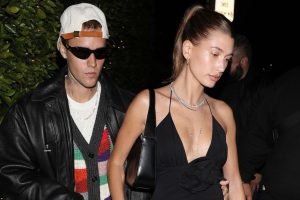 HaileyandJustin Bieber have been snapped enjoying a double date night following a recent health scare, where Hailey was rushed to hospital with stroke-like symptoms.

The pair,who last month were seen cosying up at the Super Bowl, were pictured leaving Giorgio Baldi, a luxurious Italian restaurant in Santa Monicam Los Angeles where they had met up with friends Kendall Jenner and Devin Booker.

Hailey, 25, looked chic in a plunging black dress with a band at the waist, which featured a large black flower.

She paired the look with black stiletto-heeled boots and a small black leather Saint Laurent handbag, and had her hair scraped back in a high pony.

He was also pictured wearing a cap and sunglasses as he escorted his wife to the car upon leaving the restaurant, opening the driver door for her to get in.

The couple's romantic outing comes shortly afterHailey announced she had been hospitalised after experiencing 'stroke-like symptoms', caused by a blood clot in her brain.

The 25 year old model, who recently shared her first selfie since the incident, took to Instagram to share her news in an update with fans.

"On Thursday morning, I was sitting at breakfast when I started having stroke-like symptoms and was taken to the hospital," she wrote.

"They found I had suffered a very small blood clot to my brain, which caused a small lack of oxygen, but my body had passed it on its own and I recovered completely within a few hours.

"Although this was definitely one of the scariest moments I've ever been through, I'm home now and doing well, and I'm so grateful and thankful to all the amazing doctors and nurses who took care of me!"

"Thank you to everyone who has reached out with well wishes and concern, and for all the support and love. Hailey."

The news of her health scare came afterJustin had reportedly tested positive for Covid-19, postponing his concert in Las Vegas as a result.

While his test report was not officially confirmed, a statement revealed there had been "positive COVID results within the Justice Tour family".

It read: "Due to positive COVID results within the Justice Tour family, we will unfortunately have to postpone Sunday's show in Las Vegas.

"Justin is of course hugely disappointed, but the health and safety of his crew and fans is always his number one priority. The tour launch in San Diego was a massive success, and Justin is excited to bring this spectacular show to his Las Vegas fans as soon as possible.

"The rescheduled date for Las Vegas will be Tuesday, June 28. Tickets for the original show will be honored. Refunds available at point of purchase."

For the latest showbiz reports and breaking news, sign up to OK!'s daily newsletter here.