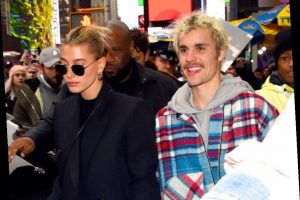 Hailey Bieber is tired of talking about her husband’s exes. Though she and Justin Bieber have been married for over two years, fans still like to bring up his past relationships, namely the one with singer Selena Gomez. Now, Hailey is finally setting the record straight on whether there was some overlap between her and Justin’s ex.

Justin and Gomez first began being seen together in 2010. They went public with their relationship in 2011. In 2014, they broke up.

“We were working out how to be in a relationship, how to be ourselves, who we were, in the middle of having people judge our relationship through the media,” Justin told i-D of the split. “I think that really messed my head up too. Because then, it’s like trust and all this other stuff that starts messing with your mind. You’re on the road. And there are beautiful women on the road. And you’re just getting yourself into trouble…”

After he and Selena went their separate ways, Justin started dating Hailey Bieber but he continued to go back and forth with Gomez.

In 2018, Justin and Gomez seemed to be back on track, however, in March, rumors started floating around that the pair’s relationship was in dire straights, according to HollywoodLife. By June of that year, Justin was back with Hailey. Their romance was quick this time around and Justin proposed in July. Due to the speedy timeline of it all, fans have always wondered if there was any overlap between Gomez and Hailey.

According to Hailey, there was no overlap between her and Gomez.

“People don’t know, too, we had been talking for a while before we got back together,” she said on the Nov. 17 episode of Ashley Graham‘s Pretty Big Deal podcast. “Contrary to popular belief, he had been single for a while and I had been single and we were kind of just trying to figure life out.”

She did later admit that things moved pretty fast.

“Everything happened really fast, I think everybody knows that,” she said. “Everybody was kind of, like, ‘Hey, did you get married?’”

Why does Justin Bieber’s relationship with Hailey Bieber work?

This wasn’t the first time that Hailey and Justin had tried being together. When they originally dated in 2015, things didn’t work out. But this go around has been different because Justin took time to work on himself.

“I think I was just hurt from my previous relationship…In my previous relationship, I went off and just went crazy and went wild, just was being reckless,” he told Zane Lowe in an interview. “[With Hailey] I took the time to really build myself and focus on me, and try to make the right decisions and all that sort of stuff. And yeah, I got better.”

The two have been married for over two years and are constantly posting to social media about how much they love one another. They were also quarantined together for a large portion of the coronavirus (COVID-19) pandemic and credit that time together as having strengthened their bond.