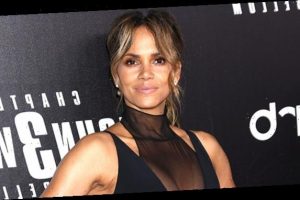 Halle Berry stunned in her latest candid shot! Wearing just lingerie and boots, the actress sipped on a can of Coca Cola.

Halle Berry is simply flawless! The 54-year-old rocked just a nude colored bra and black underwear as she posed on a bed in a new photo shared to Twitter and Instagram on Friday, March 19. She candidly looked off to the side as she held onto a black Coca Cola can, crossing her legs to show off her chunky, high-heeled combat boots. While she didn’t a photographer, the photo could have been taken by her boyfriend Van Hunt, 51.

“He don’t need to do the math to know ima problem,” the Oscar winner joked in her caption. For the casual at-home moment, she kept her hair in loose curls and sported a newsboy cap as she leaned over. “Mood,” one follower commented while others wrote, “you are insanely gorgeous!” and “obsessed with this photo – so pretty!” A fourth posted, “it’s the caption for me.”

The sexy new photo came fresh off her latest Bad & Booshy Instagram show where she tackled the topic of “ass pads” and “saggy boobs” with her stylist Lindsay Flores. Sipping their go-to cocktails, the two women hilariously spilled the tea on various topics — including ‘fessing up to seeing other naked. Wearing a tank top and ripped jeans, Halle couldn’t stop giggling as they talked about all all things body. “Here’s the naked truth …. #BadAndBooshy is BACK and we talk ass pads, saggy boobs and why @iamlindsayflores has seen me naked more than possibly anyone,” Halle wrote in her caption.

During the hilarious chat, Halle remembered a moment when she was working on a shoot for Revlon and Lindsay distracted the crew in her bikini. “I just had Nahla [now 13] she was five months old — I was doing a Revlon shoot in Hawaii,” she began. “We decided at lunch break we were going to take a run in the ocean — so [Lindsay] puts on a bikini — and when she puts on a bikini, the brains of all the men were stuck on stupid,” Halle hilariously added, sticking her tongue out to mimic the crew members.

Recently, Halle has been slaying with her gorgeous Instagram posts — including one from March 12 where she wore a see-through, perforated mini dress and white knee-high boots. Sipping a glass of wine, the Monster’s Ball star laid back and relaxed as she sat perched on a brick wall. “I mean…you are on a roll!! Keep giving us LIFE with these fits!!! I’m here for it,” she wrote.