Home » Halsey Claims Her Pregnancy Was ‘100 Per Cent Planned’ 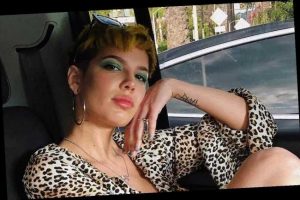 The ‘Without Me’ hitmaker sets the record straight on speculation about her pregnancy, saying it was entirely planned as she had hoped for a baby since miscarriages.

AceShowbiz –Halsey has revealed her pregnancy was “100 per cent planned.”

The 26-year-old singer – who revealed in January (21) she is expecting her first child with boyfriend Alev Aydin – has been open about her fertility struggles and dismissed speculation about her personal life on social media.

She wrote on her Instagram Story, “Why is it ok to speculate and pass judgement about fertility and conception?”

“My pregnancy was 100 per cent planned, and I tried very hard for this bb (baby). But I would be just as happy even if it were another way.”

The “You Should Be Sad” singer – who was diagnosed with endometriosis in 2016 – has been open about her experience with pregnancy loss, and said she once suffered a miscarriage whilst in the middle of a concert.

She said in 2018, “I was on tour, and I found out I was pregnant. Before I could really figure out what that meant to me and what that meant for my future … the next thing I knew I was on stage miscarrying in the middle of my concert.”

“The sensation of looking a couple hundred teenagers in the face while you’re bleeding through your clothes and still having to do the show, and realising in that moment … I never want to make that choice ever again of doing what I love or not being able to because of this disease.”

“So I put my foot down and got really aggressive about seeking treatment and I had surgery about a year ago and I feel a lot better.”

It was her second miscarriage – the first occurred in 2015, just before Halsey’s career took off.