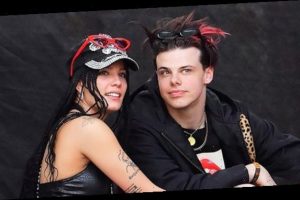 Back together? Halsey sent her ex Yungblud a cute birthday message on social media that has fans thinking they’ve rekindled their romance!

Well, this was unexpected. Halsey sparked rumors that she’s back together with her ex Yungblud on Wednesday. The Grammy-nominated singer, 25, took to her Instagram Stories to celebrate her ex, who turned 23 on August 5, with a sweet throwback photo of the two. “Happy birthday Dom!!!” Halsey wrote over the photo, which showed the exes ironically enjoying a birthday cake.

Halsey began dating the English alternative rock musician, whose real name is Dominic Richard Harrison, in January of 2019. At the time, she shared a cute snap of the pair on a sweet stroll in London. The romance was short-lived after news of their split in September of that same year. The breakup news coincided with Halsey’s new relationship with American Horror Story actor, Evan Peters.

At the time, Halsey spoke out about her split from Yungblud on social media, while addressing rumors that she moved on with Evan.

“Sometimes. People just break up,” she wrote on Twitter. “It doesn’t mean someone cheated or something bad happened or someone f—ked up. Sometimes. It just happens. Because life is constantly changing. And adults stay friends and move on,” she explained. In a follow-up tweet, Halsey added, “now u know what u know,” with a pink heart emoji.

Halsey and Evan’s relationship came to an end in March (2020) after nearly six months of dating. That month, she removed almost all of the photos she previously posted of herself and Evan on Instagram. Since then, Halsey’s been single. Though, her birthday post about Yungblud has fans thinking she’s off the market again. Let us note that Halsey has not addressed the romance buzz.

END_OF_DOCUMENT_TOKEN_TO_BE_REPLACED

END_OF_DOCUMENT_TOKEN_TO_BE_REPLACED
We and our partners use cookies on this site to improve our service, perform analytics, personalize advertising, measure advertising performance, and remember website preferences.Ok