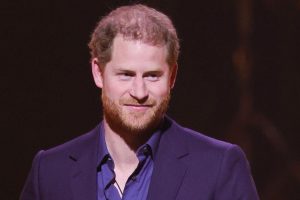 Prince Harry and his family could travel to the UK to celebrate the Queen's Jubilee with the Royal Family, it has been reported.

The Duke of Sussex's attendance for the public celebration of his grandmother the Queen's 70 years on the throne has been uncertain in recent weeks – after he pulled out of Prince Philip's memorial service.

Harry, 37, took legal action against the UK government after he was refused permission to pay for police protection when he visits his home turf.

But, it's been claimed the Prince appeared appeased at the plans put in place as he and his wife Meghan Markle visited the Queen at Windsor last week in a secret visit, the Daily Mail claims.

It's been reported the Duke and Duchess of Sussex brought their own private bodyguards from the US but stayed on the Queen's Windsor estate and received a Special Escort Group when travelling outside the grounds.

This method of security detail is now likely to be offered to Harry and Meghan, 40, and their children Archie and Lilibet when they visit the UK, reports have claimed.

A source told the publication: "Harry was fairly pleased with the way the operation worked and the liaison between his security team and the Met.

"He believes it means a workable solution can be found, allowing him to come over with his children as early as the Platinum Jubilee."

Prince Harry, who recently dodged a question about his dad and brother, is said to have been invited to appear on the balcony of Buckingham Palace during Queen Elizabeth's Platinum Jubilee celebrations.

It's been claimed the couple will appear on the balcony of Buckingham Palace during the Jubilee celebrations, but will have no formal role.

Harry and Meghan will also reportedly be invited to appear at the family events across the long weekend to celebrate Queen Elizabeth's 70 years on the throne, including the Service of Thanksgiving at St Paul's Cathedral.

Prince Harry took legal action against the Home Office after requests to pay for his own police protection were denied.

He told the Home Office he feels his family are "unsafe" with security arrangements when visiting the UK.

The Duke of Sussex's lawyer said earlier this year: “Prince Harry inherited a security risk at birth, for life. He remains sixth in line to the throne, served two tours of combat duty in Afghanistan, and in recent years his family has been subjected to well-documented neo-Nazi and extremist threats.

“While his role within the institution has changed, his profile as a member of the Royal Family has not. Nor has the threat to him and his family.”