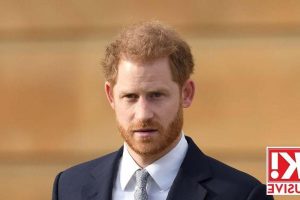 Prince Harry's attendance at the Queen's Jubilee celebrations later this year have been called into question, after he revealed he won't be flying to the UK for Prince Philip's memorial.

The Duke of Sussex was expected to fly from the US to the UK to take part in the celebrations for the Queen's Platinum Jubilee celebrations this year.

It was also reported earlier this year that 37 year old Harry could also bring his wife Meghan Markle as the couple were said to be "keeping their diaries free".

But, since the Duke revealed he would not be attending late Prince Philip's thanksgiving service later this month, royal expert Grant Harrold has questioned if Harry will go to the Jubilee, too.

Prince Charles' former butler Grant, who is known as The Royal Butler on TikTok, told OK!: "The next question is will he then come over for the Jubilee celebrations.

"It's possibly the last big celebration that the Queen will have and he's been at every other one so is that going to mean he's not going to be at this final one as well? Which, from my point of view, I would find really sad.

"Families have fall outs and disagreements we've all been there but with these kind of big events you don't want to be there to show support if you can be there."

Meanwhile, royal biographer Tom Bower said the chance of Harry attending the Jubilee was "unlikely", due to the upcoming release of his book.

He said: "I think Harry won’t come back because he knows he cannot face his family, and be pleasant with them, knowing what he’s written about them in that book.

"That book will have a lot of casualties and cause a lot of hurt. It will really deliver, as Harry knows it has to, to justify the money he’s been paid to do it.

"How can Harry come back and pretend it’s all fine? The worst of what he will say is yet to come."

Grant added that he feels the Queen, 95, would be "shocked" over Harry's decision not to attend Philip's thanksgiving service on Tuesday 29 March.

He explained to OK!: "When I worked at the household I was very aware of how close Prince Harry is to his grandparents – both grandparents.

"And I think that's quite obvious from footage that's been released over the years – obviously you saw him do the mic drop with the Queen on the Invictus Games and all that kind of humour.

Grant added: "I think in some ways Prince Harry reminds the Queen of Prince Philip, so he was close to his grandfather and is, as far as I'm aware, close to his grandmother. So it is a shock that he's not coming over."