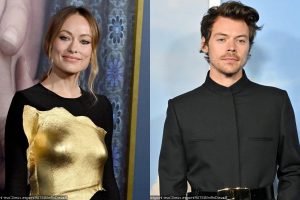 The ‘As It Was’ crooner and his girlfriend, who first linked in January last year after working together on ‘Don’t Worry Darling’, are reportedly ‘taking a break’ and their decision is ‘very amicable.’

AceShowbiz –Harry Styles and Olivia Wilde are reportedly no longer together. Words on the street are that the “As It Was” crooner and his girlfriend of nearly two years are breaking up, a month after the filmmaker’s former nanny made explosive claims about their relationship.

PEOPLE reported on Friday, November 18 that the couple, who was first linked in January 2021 after working together on “Don’t Worry Darling“, are “taking a break” from their relationship. A source close to the situation offered more details, “He’s still touring and is now going abroad.”

In the meantime, according to the insider, Olivia “is focusing on her kids and her work in L.A.” Olivia shares two kids, Otis, 8, and Daisy, 6, with her ex Jason Sudeikis. The so-called source went on to stress that “it’s a very amicable decision.”

“They’re still very close friends,” the informant said of the now-exes. The source further added that the pair went separate ways due to “different priorities,” saying, “Right now, they have different priorities that are keeping them apart. The public pressure on them has been difficult. They’ve had ups and downs throughout the relationship.”

The news of the split came as a shock to many of the couple’s fans as Olivia recently took her kids to Harry’s “Love on Tour” stop in Los Angeles. In footage shared by a fan on social media, the 38-year-old actress/filmmaker could be seen dancing along to his hit “As It Was” with her daughter Daisy as they attended the Tuesday, November 15 show at the Kia Forum.

In October, Harry and Olivia were hit with shocking allegations made by Olivia and Jason’s former nanny. The woman, who anonymously spoke to the Daily Mail, claimed Olivia started dating Harry to boost her image.

The nanny also made other accusations against Jason, including that he discovered Olivia and Harry’s tryst via an old Apple Watch and threw himself under Olivia’s car after she made special salad dressing before going to see Harry. The “Ted Lasso” star allegedly fired the nanny in a fit of drunken rage last February.

Following the nanny’s accusations, Olivia and Jason released a joint statement, calling the claims “upsetting” and “false.” The exes stated, “Her now 18-month-long campaign of harassing us, as well as loved ones, close friends and colleagues, has reached its unfortunate apex. We will continue to focus on raising and protecting our children with the sincere hope that she will now choose to leave our family alone.”