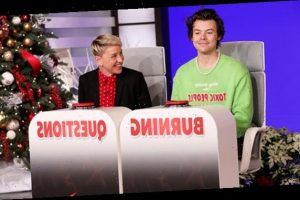 Harry Styles wasn’t shy about admitting if he’s dating anyone right now, and how much he used to love Jennifer Aniston. He told all  in a never-before seen clip from ‘Ellen’.

Harry Styles spilled the tea in an intense round of “Burning Questions” on Ellen! Ellen DeGeneres didn’t shy away from asking the “Watermelon Sugar” singer, 25, the tough questions during the new clip from his December appearance, coaxing Harry into revealing if he’s dating anyone. He really didn’t know what he was getting himself into by agreeing to play the game. His answer was short and sweet when Ellen asked about his relationship status: he’s single! He gave a definitive “no” and then pressed the buzzer to move on to the next question. He didn’t even hesitate when he admitted To Ellen that Jennifer Aniston, 50, was his childhood crush, too.

No word on if she’s his current #1, though. Some other revealing things we learned about Harry during “Burning Questions,” which you can watch below: he prefers briefs over boxers, his favorite music video is Peter Gabriel‘s “Sledgehammer”, he would be a florist if he wasn’t singer, and his guilty pleasure is working out while listening to… One Direction. There was one thing Harry wouldn’t quiet answer, though. He said that his three favorite body parts on a woman were their “eyes, smile, and character.” Booooo!

It’s not like Ellen stopped prying during the game, though. During his interview on the full, December 18 episode, she straight up asked him about being friends with his rumored ex, Kendall Jenner. “So when you hosted [The Late Late Show] for James Corden, your guests were Tracee Ellis Ross and Kendall Jenner,” Ellen asked. “And you and Kendall are really good friends now, right?” Harry was visibly caught off guard by the question, and totally flustered.

He mumbled, “yeah” and said that they had been friends for a few years. But, he was giggling and stumbling over his words! It was just like when he chose to eat gross food on The Late Late Show, rather than tell Kendall if any of the songs on Fine Line were about her. There’s a pattern here!