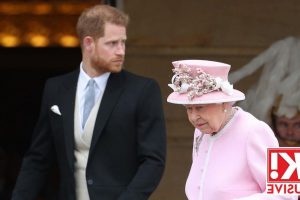 Royal expert Duncan Larcombe has shared how the Queen would've been "wounded" by Prince Harry's actions in the immediate years before her death on Thursday 8 September.

While he always remained close to the Queen, Harry's relationship with his extended family had been strained for some time following his and wife Meghan Markle's move to step down as senior member of the Firm back in 2020.

The couple made the decision in a bid to secure their financial independence while also maintaining a level of privacy from the media.

Since then, they've both taken part in explosive interviews, including one with Oprah Winfrey in 2021 in which they made some heavy allegations about the Royal Family.

"In those months when I was pregnant, we had in tandem the conversations of him not being given security or a title, and also concerns about how dark his skin might be when he's born," Meghan, 41, claimed, while Prince William, 40, responded: "We are very much not a racist family".

Meanwhile Harry said his "life was a nightmare" and accused the Royal family of "total neglect" as he opened up about his mental health struggles following the death of his mother Princess Diana in the Apple TV+ series The Me You Can't See.

Despite this, both Meghan and Harry previously shared their love for the Queen as she said Her Majesty had "always been wonderful" to her.

Now, royal expert Duncan has told OK!: "No matter how resilient and pragmatic the Queen was, this maelstrom of extraordinary circumstances must have distressed her.

"The departure of Prince Harry and the ugly accusations thrown back at the royal family about racism and persecution were especially difficult."

He went on to share that Harry was "always the apple of her eye" and "adored his slightly rebellious streak and the fact that the public warmed to him."

"So that whole business must have wounded her deeply – as must the [Prince] Andrew affair," Duncan added – referencing 62 year old Andrew's alleged sex scandal involving Virginia Giuffre, which he ended up settling out of court for £12million.

Despite Harry's 2020 move overseas, it is thought that Prince Harry still managed to maintain a close bond with The Queen.

"One thing about the Queen is she has to manage being a grandmother but also how it affects the wider institution," a royal insider told PEOPLE Royals.

“If Harry asks, the Queen would say yes,” a friend of the royal told the outlet. “She adores him."

Their close bond was also discussed in an in an interview with journalist Hoda Kotb.

When asked by the interviewer what the best thing about his grandmother was, the Prince replied: "Her sense of humour. Her ability to see the humour in so many different things."