Home » Celebrities » 'He Was Evil': Co-Star Says Will Smith 'Bullied And Humiliated' Him On Set Of Ali

'He Was Evil': Co-Star Says Will Smith 'Bullied And Humiliated' Him On Set Of Ali 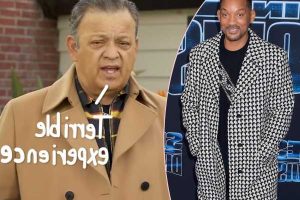 This is not a good look for Will Smith…

By now, everyone knows the 53-year-old has faced a ton of backlash ever since he stormed onto the stage and slapped Chris Rock across for making a joke about his wife Jada Pinkett Smith. While Will anxiously waits to see what consequences the Academy decides to rain down on him, many celebrities have offered up their thoughts and opinions on the whole situation. But one former co-star is who knows Will’s “rage” first hand is now speaking out.

Paul Rodriguez told The Sun he was not shocked that Will attacked Chris since the actor had made his life a “living hell” when he “bullied and humiliated” him on the set of the 2001 biopic Ali. The actor recalled:

“Chris Rock only took one slap at the Oscars … but I took a verbal slap from Will Smith every day. And sometimes I think the emotional injuries are just as deep, if not deeper, than physical ones.”

The 57-year-old comedian, who has been in movies here and there since the ’80s (you may have seen him in A Million To Juan or Tortilla Soup) was hoping to springboard into a real dramatic stage of his career, but Will’s abuses stopped that:

“That movie was meant to be a huge stepping stone in my career, but for me it ended up being a nightmare because of all the sickening abuse I got from Smith. He was evil to me but nice to everyone else. It was sort of like Jekyll and Hyde.”

Paul recalled how excited he was to work with Will again after he was cast in the movie as Dr. Ferdie Pacheco, the personal physician and cornerman for the legendary boxer Muhammad Ali.

The pair had previously worked together on the 1993 romantic comedy Made in America and had built up a pretty great relationship afterward:

“Back then he wasn’t the superstar he is now. We hung quite a lot and everything had always been really friendly between us. From time to time, I’d run into him in the studio when we were working on different projects and everything was terrific. So when I went to audition for Ali, after the fifth or sixth time I read for Michael Mann, I ran into him again. We stopped and chatted for a little while and I asked him to put in a good word for me. He told me, ‘I think he likes you, I think the part is yours already.’”

According to Paul, their relationship came crashing down for an unknown reason. However, he has said before (he first spoke about Will’s mistreatment back in 2016) believes it started to sour after an alleged incident between Will and the real Ferdie Pacheco. He explained in detail:

“I was off that day so I didn’t see the commotion. But the real Ferdie Pacheco was on the set and apparently he was inebriated and went into Will’s dressing room and was complaining that his character should have a bigger part, and should be played by Danny Garcia instead of me. Things escalated and apparently Pacheco started calling Will the N-word. Police were called and he was escorted off the set – it was bad.”

But somehow the dispute got transferred over to him? He lamented:

“Will never looked at me the same from that point onward.”

When Paul returned to the set the following day, he had no idea what went down between the two men and went right into shooting a scene where he had to lace up Will’s gloves. The stand-up asked the future Oscar winner if the laces were done right at one point but were completely ignored. Out of nowhere, he then looked at Paul, moved his arms away, and yelled “you don’t know what the f**k you’re doing”:

“I’m like, ‘Will, I’m just lacing up gloves, the camera isn’t even on me right now.’ I think my lines were something like, ‘stick and move Champ, stick and move.’ And he just looked at me again and said, ‘you don’t know what you’re doing,’ and everything just went drastically downhill from there.”

From that point, Paul claimed Will continuously bullied him on set, doing things such as not engaging in conversation despite often sitting next to him in makeup and getting his fellow cast and crew members to turn against him:

“ the most basic cordiality, you know, not even ‘Good morning. How are you? How’s it going?’ when we all sat on a makeup chair. I mean, I was there for six hours every day, but there was never any bantering … we used to talk but now it was as if somebody smelled bad and I was tainted. And it tainted the other actors. All of a sudden nobody wanted to hang out with me. Michael Mann even started hollering me out in front of all the other actors in group scenes for things I wasn’t even doing.”

When the entire cast was invited to dinner at Nelson Mandela’s home, no one even informed Paul of the outing. It wasn’t until Mykelti Williamson, who played Don King in the movie, eventually spilled the details about the invite that he found out. When he arrived at the house, Will allegedly appeared very bothered that he showed up. What’s worse is Paul claims he even issued a “threat” against him:

“I remember I was getting some food from the buffet in that beautiful house when he came up to me and said, ‘You need to be very careful. You’re a long way from anyone who likes you. Because you’re in Africa, there are no Mexicans here.’”

Whoa… What the eff?!

Paul then asked him to explain what he meant by his racially charged comments but Will never did. By then, he had reached a breaking point and even threatened to quit the movie. However, co-star Jon Voight talked him out of it, arguing that Will was just being a method actor — and that their situation would improve once his character was done being angry. But it didn’t. In one last-ditch effort to distinguish himself from his character, Paul said he removed his prosthetics and told Will one day:

“‘Look, if you’re unsatisfied with me, I’m not gonna sit here and take this abuse. It’s me, Paul Rodriguez, man. I’m not Pacheco, I’d never use the word he used, that’s not who I am. I’m playing this guy.’ I asked him why he was choosing to hurt me but I couldn’t get through. He just told me to ‘shut up and stand there’ .”

When the film premiered on Christmas Day in 2001, Paul found his character was significantly cut from the movie and thinks Will was the reason for it:

“I did everything within my power to try to shine in that movie, including taking voice lessons to sound like Pacheco, and for all that I got ostracized and humiliated. This seriously injured my career, because Hollywood would’ve looked at how I was cut out and thought, ‘Wow this Rodriguez was so bad they cut him from the move’, but that wasn’t the case. It was a disaster and I have to overcome that. … All I was left with was just a sickening feeling like I was some kind of sacrificial lamb. What was meant to be a dream role was made into a nightmare.”

In the interview with The Sun, Paul shared that he decided to come forward with his full story as he has no more “fear” over the consequences of telling his truth after Will started facing backlash for the slap:

“When he hit Chris and I saw that smug look on his face, where he looked like a thug, I lost my fear . I’ve got nothing to lose – I’m just angry. He looked like he was saying, ‘I dare anybody to touch me.’ But he’d just committed a crime; you get arrested for that if you’re an ordinary human being, but apparently, he’s above the law.”

Furthermore, Paul cannot believe that the “laws of civility and conduct” were seemingly ignored simply “because he can act”:

“Are we going to excuse Harvey Weinstein because he’s a great producer in spite of all the women he’s hurt? No, it doesn’t cancel it out – so it shouldn’t for Smith either. This industry has been so generous to Smith. He’s hit the highest possible heights and this is how he acts? It’s outrageous, but not surprising.”

“It’s a very sad situation, I guess I feel sorry for in a way. I’m not wishing him anything other than for him to look at himself in the mirror for him to get the proper treatment that he needs to get. I also hope he properly apologizes to Rock, because a post on social media is not an apology – he needs to come to his door.”

And although it has been more than 20 years since the filming of Ali wrapped, Paul hopes to get an apology from Will for how he was treated on set. As for working with the Aladdin star again? Well, Paul would ultimately have to pass up on the opportunity:

“I feel he did me so much damage. But deep down in my heart, I’ve always said that people dig their own graves and this was always going to come out eventually. I bet as the months go on, we’ll find out I wasn’t the only one he was evil to.”

Reactions to Paul’s claims, Perezcious readers? Sound OFF in the comments (below).