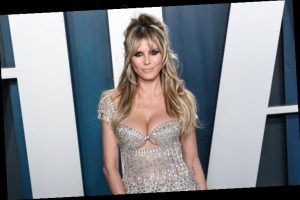 Law enforcement has been called to the Los Angeles house where by the female judge of ‘America’s Got Talent’ is staying following an unwanted visit from a man.

AceShowbiz -Police officers were called to Heidi Klum‘s house last weekend (12-13Sep20) after a man started banging on the model’s door, shouting that “Jesus told” him to visit her.

Law enforcement sources told TMZ.com that the man turned up at Heidi’s Los Angeles home and began pounding on the door, “claiming Jesus told him to pay her home a visit.”

Apparently, the “America’s Got Talent” judge was home at the time, but never saw the man herself because someone else answered the door.

Nevertheless, cops were called to Heidi’s home, but by the time they arrived, the man had left. However, upon conducting a search of the local area, they found the man wandering down the street. When talking to him, officers determined that he was suffering from mental health issues, and placed him on a 5150 psychiatric hold, TMZ added.

The insider added that after talking to the man, police felt he was “confused” and hadn’t specifically been targeting Heidi’s house.

END_OF_DOCUMENT_TOKEN_TO_BE_REPLACED

END_OF_DOCUMENT_TOKEN_TO_BE_REPLACED
We and our partners use cookies on this site to improve our service, perform analytics, personalize advertising, measure advertising performance, and remember website preferences.Ok