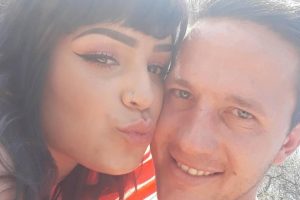 Tiffany Franco and Roland Smith first joined the famed “90 Day Fiancé” franchise in 2019, as one of the featured couples on the spinoff series, “90 Day Fiancé: The Other Way” (Via IMDb). This installment of the show follows a group of Americans that move overseas to be with their romantic partners. The series showcases the Americans adjusting to the customs of their new homelands, trying to win the favor of their in-laws, and facing the trials of living with a new partner for an extended period.

On “90 Day Fiancé: The Other Way” Franco moved to South Africa with her son Daniel to be with her then-fiancé Smith. At the time, Franco wanted Smith to move to the United States, but was struggling to get his K-1 visa approved because of his criminal record (via YouTube). Once reunited in South Africa, the couple held a wedding ceremony and became pregnant with their first child together, but Franco ultimately decided to return to the States due to safety concerns. When we last saw the couple on the “90 Day Fiancé: The Other Way” Tell-All special, in October 2019 Franco and Smith shared that they had officially started the visa process to bring Smith to the United States. However, their relationship has taken a turn since that joyous announcement.

Tiffany Franco and Roland Smith had a messy split

In January 2020, Franco announced on her Instagram account that she was separating from her husband Roland Smith. She wrote on an Instagram story, “Unfortunately, I have to announce that Roland and I will be separating. I wanted to be the first to let you know rather than hiding it and putting on a cascade for social media.” After Franco revealed the split, Smith decided to share his side of the story. He claimed that Franco was unfaithful and that he was filing for a divorce in South Africa (via People).

Franco denied Smith’s allegations and called him toxic. She wrote on her Instagram story, “When a toxic person can no longer manipulate you they will try to manipulate the way others see you. Truer words have never been spoken. I wish nothing but good things for Ronald but I won’t waste one more second being taken for granted and being unhappy.”

A few months later, Franco revealed on another Instagram story that the couple reunited and that they were attending marriage counseling (via In Touch Weekly). The couple is currently in the process of getting Smith’s visa approved to move to the United States and gearing up to star in Season 6 of “90 Day Fiancé: Happily Ever After?”