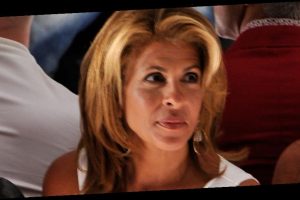 Hoda Kotb is opening up about her diagnosis.

The 56-year-old Today co-anchor made an appearance on The Drew Barrymore Show on Friday (October 16).

PHOTOS: Check out the latest pics of Hoda Kotb

During her appearance, she spoke on going public with her breast cancer diagnosis years ago.

“It’s funny, sometimes it’s easy to share the good stuff but you don’t want to share the crummy stuff and having kids was a great joy for me and sharing that was effortless for me,” she explained.

“When I was sick at one point, when I was working at NBC with breast cancer, I was determined to put that deep in my pockets and not share that because I didn’t want to be that person. I remember distinctly meeting someone on a plane and he asked me why I was wearing a compression sleeve on the plane and I told him that I had cancer, but I said to him, ‘but I hope that’s not how you remember me.’ And he said, ‘What’s wrong with you? Having cancer is part of you. It’s like working at NBC or getting married or graduating college. Let me give you some advice and you can go to sleep: don’t hog your journey, it’s not just for you,’” she continued.

“I sat there in that moment with a complete stranger and realized I had just changed the path of my life. He said, ‘You can put your stuff deep in your pockets and take it to your grave or you can help someone. Those are your choices, A or B, choose.’ When he said that I was so struck by the fact that I wanted to hide the bad parts of my life and suddenly I felt lifted and lighter and I mentioned it at work when I had kept it a secret, I said it out loud, and all of a sudden I found it really was helping people. It shaped me. It didn’t define me, but you can still help people with that.”