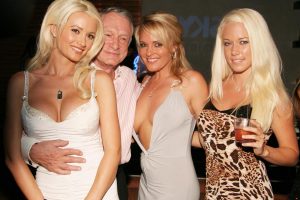 Fans of The Girls Next Door know there’s long been a schism between the exes of the late Hugh Hefner — and exes of each other, we suppose? So is the long national nightmare over? In a word… no.

But the juicy scoop many longtime followers of the Playmates were interested in was how things stand with the third leg of their tripod. They’ve long been at odds with Kendra Wilkinson — any change there?

Nope! Nothing has changed much since the last time we got some nasty back-and-forth last year amid the latest accusations of abuse against Hef. But obviously this all started long before Secrets of Playboy. They were actually OK on the show, despite some onscreen issues. Holly explained:

“When we were leaving, I loved Kendra. We had our sibling rivalry while we were there, but I thought that after she was with Hank , she just seemed like so much more mature and so happy and I feel like all three of us were so happy for each other and the direction our lives were going.”

Holly and Bridget were in attendance at her wedding and everything. Things didn’t go wrong until they started making Holly’s World and Kendra, respectively:

“I was doing my spin-off, she was doing her spin-off. I go into more detail about her in my book, but things got weird with me and Kendra.”

It was apparently Kendra playing along with a producer’s idea to create fake drama between them to help their ratings. Holly blasted:

And the book didn’t help to cool things off. So far as we know they’ve been on bad terms ever since.

Like we said, the feud got some new fuel last year when Holly (along with other former models) started speaking out more than ever about her time at Playboy. When she was on the Call Her Daddy podcast to talk about it, the burlesque performer made clear she and Kendra were still not on speaking terms. That seemed to ruffle her former co-star’s feathers, as Kendra responded shadily that “it’s 2021” already.

Yeah, 2021, 2022… we don’t see these two ever becoming friends again tbh. But hey, they’ll always have the assembly line? *shudder*