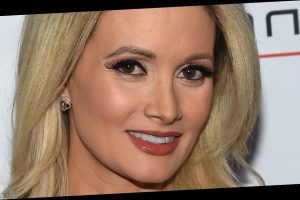 Holly Madison dated Playboy founder Hugh Hefner from 2001 through 2008. She was part of the E! reality show The Girls Next Door, which first premiered in 2005, alongside fellow Playboy models Bridget Marquardt and Kendra Wilkinson. The couple supposedly split because Madison wanted to get married, and Hefner — though he admitted that he loved Madison “very much” — said that marriage “wasn’t part of [his] puzzle,” according to Entertainment Tonight. “If Holly says it’s over, I guess it’s over. She’s still here in the house. Until a few days ago, we were still sharing the same bed,” Hefner said at the time.

And while Madison moved on with her life in the years that followed, she has always been fairly candid about her relationship with Hefner, and her experience living at the Playboy Mansion. In the April 7 episode of the Call Her Daddy podcast, Madison got to talking about her sex life with Hefner. She revealed that she had to “have sex” with Hefner before moving into the Mansion, and added that she and the mogul had “boring basic sex.” Madison also shared that she’s super thankful that one thing in particular didn’t happen while she was dating Hefner. Keep reading to find out what that one thing is.

Holly Madison may have wanted to marry Hugh Hefner, but she's happy she never had kids with him

While chatting with Alexandra Cooper on the Call Her Daddy podcast, Holly Madison revealed that she is thankful that she never got pregnant with Hugh Hefner’s child. Fairly early on, Madison did want to have a baby with Hefner, and she was upset that it didn’t happen. “I knew it was because of him. I was healthy. He was just too old,” Madison said about not conceiving despite having sex with the renowned ladies man. She and Hefner even tried to conceive by way of in vitro fertilization, but that didn’t work, either. Madison went on to say that she wanted to have a child with Hefner because she had “almost locked [herself] into [a] box,” thinking that she’d be spending the rest of her life in the Mansion — and she knew that she wanted to have children.

When Cooper asked if Madison was happy that she didn’t end up having a baby with Hefner, she enthusiastically replied, “Yes! Thank God!” Madison did want to become a mom, though, and she went on to have two children, Rainbow Aurora and Forest Leonardo, with Pasquale Rotella, whom she married in 2013. They divorced in 2019.