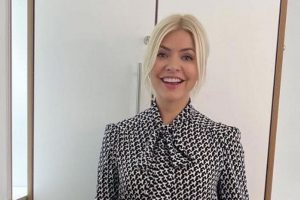 Holly Willoughby was forced to change her outfit for presenting duties on This Morning at the last minute after a blunder.

As she normally does, Holly, 41, had taken to Instagram to show off her outfit before going live on ITV, as she sported a pussy-bow blouse with a geometric pattern tucked into a black miniskirt, paired with tights and pointed court heels.

Before long, though, she was back as she took a selfie in her makeup chair as someone put the finishing touches to her look. This time though, she was wearing a cherry-printed blouse after raiding the This Morning wardrobe.

In the caption the mum of three explained that her previous shirt had been causing "strobing issues" with the cameras, and she was therefore forced to change her top at the last minute.

Holly has been more active on social media as of late, proving that she is firmly moving on from the controversy surrounding "queue-gate", after she and her This Morning co-host Phillip Schofield, 60, appeared to "jump the queue" to see the Queen Lying-in-State whilst members of the public waited for hours.

A petition to have them axed from their lucrative jobs at This Morning reached more than 75,000 signatures, and their squeaky-clean images faced much criticism.

This Morning released a statement amidst the furore, insisting that Holly and Phillip were at Westminster Hall in a work capacity and that they hadn't "jumped the queue".

An ITV spokesperson told OK!: "This Morning had press accreditation and like other media, Phillip and Holly were escorted to work from the press gallery by government staff. They did not file past The Queen's coffin.

"They were there alongside a host of other broadcasters and national press outlets for an item that will be broadcast on Tuesday's show. Any allegations of improper behaviour are categorically untrue."

Since the saga, Phillip's £1 million contract with We Buy Any Car has ended, however, Holly has signed a brand new deal with Marks & Spencer, said to be worth seven figures.

The British retail giant said: “We have extended our contract with Holly, and we will continue to work with her."

Holly has been an ambassador for M&S since 2018, and has “their full support”, an insider told MailOnline following the new deal.

She captioned her post: "Party time… thank you @teepeevibetribe," followed by a green heart emoji.