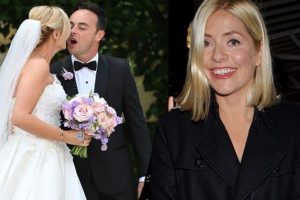 Holly Willoughby jokes with Bradley Walsh as he eats chocolate

Ant McPartlin, 45, wed his former PA, Anne Marie Corbett, after three years of dating at St Michael’s Church in Heckfield yesterday. The ceremony was full with the likes of his celebrity pals including Declan Donnelly, Phillip Schofield, Alesha Dixon and Dermot O’Leary on the guestlist.

One person who was noticeably absent was Holly Willoughby, however, she did appear on screen last night hosting Take Off with Bradley Walsh.

Some fans questioned why she could not make pal Ant’s big day, but it transpired that the show is not filmed live and Holly is currently on her holidays.

One fan questioned why Holly couldn’t juggle her commitments after having “all day” to be at Ant’s do.

Insisting she “still could have gone”, others defended Holly’s “no-show”, explaining more information was needed.

Although the This Morning host was unable to attend his big day she did send him a message of congratulations.

Holly previously stepped in for Ant on I’m A Celebrity…Get Me Out Of Here! in 2018 when he took time out from the limelight to undergo recovery following his arrest for drink-driving.

A picture of a cheering Ant holding hands with his smiling new bride was posted from the official Instagram account he shares with long time presenting partner Dec, with the caption: “Mr and Mrs McPartlin!”

Amanda was unable to be at the wedding as she is currently on holiday abroad, but she apologised to the I’m A Celebrity…Get Me Out Of Here! star on social media.

She typed: “So sorry we will miss @antanddec special day…we are still away. Sending our love and huge congratulations to Ant & Amzie on this special day.”

However, one person who did not seem thrilled about the nuptials was Ant’s ex-wife Lisa Armstrong.

Ant and Lisa were childhood sweethearts but split in January 2018.

Later that summer he revealed he’d found love with PA Anne-Marie Corbett, who was close pals with Lisa.

The former couple’s £31M divorce was finalised in April 2020 after a long legal battle – including custody of their beloved dog Hurley.

Following their bitter split, Lisa liked a tweet from a fan yesterday, that read “Terrible weather in Hampshire today.”

The TV presenter had tied the knot in front of 100 guests at a church as the weather thankfully managed to stay dry,

He kissed his beautiful bride in front of fans outside the church and posed for photos.

Meanwhile, Lisa has been enjoying a luxury hotel break with her lover.