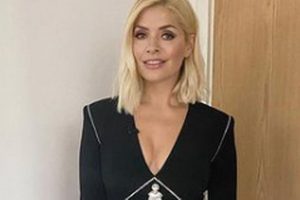 Half of TV duo favourites Ant and Dec, Ant McPartlin married Anne-Marie Corbett yesterday in a lavish ceremony in Hampshire, but popular presenter Holly Willoughby was one of the celeb guests who missed the day but sent the couple a sweet message.

Holly was among the star-studded guests invited to the wedding but was not there on the day despite her This Morning co-host Phillip Schofield being in attendance.

Holly did share her congratulations to the happy couple as she responded to a picture Ant, 45, shared on Instagram.

Ant posted a photo from the day, that has racked up more than 680,000 likes, where he is seen fist pumping the air outside the church as he held hands with his new bride.

He captioned the post: “Mr and Mrs McPartlin!!” and followed it with a red heart emoji.

Holly took to the comments box to wish the couple well, she said: “Congratulations” followed by four red heart emojis.

Although Holly wasn’t there on the day, she posted on her own Instagram yesterday a photo of herself in a stunning black tassel embroidered dress as she promoted her new BBC show Take Off.

She captioned the picture: “#takeoff 6:05pm… dress by @davidkomalondo shoes by @ginashoesofficial.”

Holly wasn’t the only celeb to hit the comments box to congratulate Ant and Anne-Marie on their wedding day.

Amanda was another celeb pal that didn’t make the big day and yesterday she shared a post on Instagram with her 1.7 million followers where she apologies to Ant for missing his wedding.

The post featured an image of herself, fellow judge Alesha Dixon, 42, and hosts Ant and Dec laughing and joking behind the scenes of Britain’s Got Talent.

She captioned the post: “So sorry we will miss @antanddec special day ..we are still away sending our love and huge congratulations to Ant & Amzie on this amazing day..”

The BGT judge was unable to attend as she is on a luxurious Greek getaway with husband Chris Hughes and daughters Hollie, nine, and 15 year old Alexa, also known as Lexi.