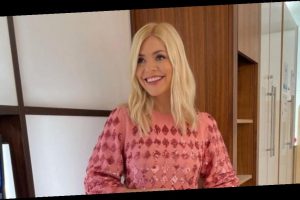 Back in September This Morning announced that they will be putting on a Christmas pantomime in a bid to spread some festive cheer, and now Holly Willoughby has given us a glimpse of the script!

Teasing her followers with what’s to come, the presenter took to Instagram to reveal what Disney classic the show will be taking on.

Sharing a snap on her Stories, Holly can be seen holding the script that displays the words: “This Morning Panto Script – Cinderella”.

With many pantomimes unable to go ahead this Christmas thanks to the coronavirus pandemic, fans will no doubt be delighted that Holly and her co-stars Phillip Schofield and Alison Hammond will be giving us our fill.

Calling the news "exciting", Holly said: “2020 hasn’t been the year we all hoped it would be. Amongst the many things that have been cancelled it looks like there won’t be many pantomimes this Christmas.”

Phillip continued: “Well, we couldn’t let that happen so today we can reveal, can I have a drum roll, please? That this Christmas we are throwing a This Morning pantomime.”

The This Morning Christmas pantomine will take place on Friday 11 December, and we for one can’t wait!

Holly recently made a hilarious blunder on the ITV show when discussing whether or not heckling should be banned at pantomimes.

The 39 year old made an unfortunate slip of the tongue when referring to Blackpool Grand Theatre, calling the city: “Black poo".

The gaffe made co-host Phillip and guest Anne Diamond chuckle as they struggled to continue with the conversation, with Holly joking: “That was unfortunate, wasn’t it?!”

Phillip posted about the blunder on Instagram Stories later in the day, including the caption: “Blackpoo?”

Popular Holly was recently blamed by co-host Phil for the trials on I’m A Celebrity… Get Me Out Of Here! getting easier after she co-hosted the show with Declan Donnelly in 2018.

Referring to the Harm-oury trial, in which Ant and Dec helped contestants AJ Pritchard and Jessica Plummer find stars to win meals for the camp, Phil said: “Dec is a lot nicer this year, Holly cheated by helping them and they never did that before.”

He went on to reveal that Dec, 45, had confirmed that it was Holly who had influenced him to help the celebrity contestants.

Phil said: “Dec said yesterday in a text to both of us: ‘I never ever helped in the trials ever, until Holly taught me how to, they never would have got six stars without my help’.”

END_OF_DOCUMENT_TOKEN_TO_BE_REPLACED

END_OF_DOCUMENT_TOKEN_TO_BE_REPLACED
We and our partners use cookies on this site to improve our service, perform analytics, personalize advertising, measure advertising performance, and remember website preferences.Ok