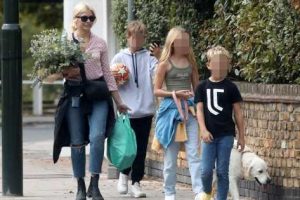 This Morning's Holly Willoughby was spotted spending some quality time with her three children before heading back to work next week.

The TV presenter, 41, decided to go on a trip out to South West London with her three kids and adorable dog Bailey for some last-minute time together before she returns to ITV's This Morning. In the photos, she could be seen watching on as her kids enjoyed a kickaround with a football and Bailey played with other dogs in the park.

Holly could be seen in good spirits, grinning as she enjoyed her time out with her three kids, Harry, 13, Belle, 11, and Chester, seven, before the group headed to a flower market to buy some plants for their home.

On their way back, Holly was pictured carrying a plant in her arms, as well as holding a shopping bag some more flowers in the other hand.

In the photos, Holly looked glamorous and casual, opting for a pink shirt with a dark grey dotted design, with some blue three-quarter ripped jeans, and some black Chelsea boots.

She accessorised with a black bag and a pair of sunglasses, wearing her blonde tresses in a messy bun.

Meanwhile, Holly's kids opted for casual looks for their trip out – with Harry wearing a grey hoodie with some black jogger bottoms and a pair of white trainers.

Belle, on the other hand, wore a green tank top and some light blue jeans, also opting for some white trainers. She also decided to bring a blue hoodie jacket and a yellow coat, which she tied around her waist.

Chester decided to wear a black t-shirt with a large Juventus football club logo on it, as well as some dark blue jeans and some bright yellow and orange trainers.

Holly keeps her children very much out of the limelight, only sharing a handful of photos of her children – but often not showing their face.

This includes a recent snap she shared of her cuddling her youngest son, Chester, before he heads back to school.

In the photo shared to Holly's Instagram page, the This Morning presenter went for a makeup-less selfie while wearing pyjamas, with a shirtless Chester lying on her chest and giving her a cuddle.

Doting mum Holly captioned the cute photo: “All the stripes and all the feels… soaking up the last few moments before back to school”.

Holly shares her three kids with Husband Dan Baldwin, whom she married in 2007.

In the recent pics, Holly seemed unfazed from recent reports that some fans were calling for her and co-presenter Phillip Schofield to be replaced as the hosts of This Morning – after some solid shifts by replacements Ruth Langsford and Rylan Clark.

The pair had a week-long stint in charge of the show, and viewers were very keen to see more of them – with some even suggesting the long-standing This Morning duo were "well past their sell-by date".

The MailOnline reported a number of viewers' concerns, with one saying "Ruth & Rylan were my favourite couple over the summer break, then Vernon & Josie as he teased her so much. Get rid of Holly & Phil who are boring!!!"

Another said: "Ruth and Rylan should do it all the time. Phil and Holly think it’s all about them. Will miss not seeing them. Couldn’t they have done next week.’ Another tweeted: ‘Ruth and Rylan, far better than Lord and Lady Phil and Holly who are well past their sell-by date."

There's been some tension between Phil and Ruth Langsford in the past, with Phil cutting off Ruth mid-sentence while she was presenting Loose Women – resulting in a fall-out between him and Ruth's husband, Eamonn Holmes.

But there are also some rumours that Phil, 60, and Rylan, 33, have not always seen eye to eye in the past – with a source close to the show telling the MailOnline: "You do have to wonder what Holly and Phil made of Ruth and Rylan’s popularity. The viewing figures were great, as was the social media interaction, which is important to ITV.

"People around the building are laughing at the irony of Ruth being more popular than Phil, especially after the history between them, and more so Eamonn."

Holly and Phil have been absent from This Morning for eight weeks to take their annual summer break, with a number guest presenters taking over including Rylan and Ruth, as well as Alison Hammond, Dermot O'Leary, Vernon Kay, and Josie Gibson.