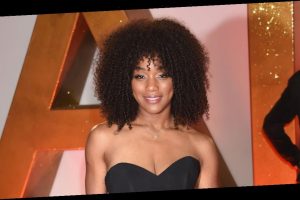 Hollyoaks has spoken out after actress Rachel Adedeji said racist incidents had taken place behind the scenes on the Channel 4 soap.

The TV star, who plays Lisa Loveday on the popular soap, took to her Twitter feed to reply to a post shared by the show where actress Kéllé Bryan, who plays Martine Devaraux, could be seen saying they've created a podcast "all about racism".

Hitting out at the fan-favourite series, Rachel said their response seemed "performative and disingenuous" and said "systemic changes must be put into practice".

The soap has now responded in a statement shared to their Instagram account, saying Rachel’s claims are now being investigated.

The statement read: “Hollyoaks has zero tolerance on racism.

“We are taking Rachel Adedeji’s comments extremely seriously and are investigating.” Posting her statement on her Instagram Stories as well as her Twitter, Rachel wrote on Friday: "I am disappointed with Hollyoaks' approach to showing solidarity with the Black Lives Matter movement yesterday."

She went on to share a list of injustices she has experienced while working on set with the cast and crew of the show as she continued: "Did Black Lives Matter when I was told "you're all the same" by a make up artist you employed, and remains in employment till this day?

"Did Black Lives Matter when we were referred to as 'blackies' by a senior member of the production team? Do Black Lives really Matter to you if over the last 4 years at Hollyoaks, I have only worked with ONE black director?"

Rachel continued by sharing how disheartened she is by Hollyoaks' effort towards creating change in the workplace as she said: "Honestly, the list goes on. Having a black cast member speak on behalf of Hollyoaks to show that the work is being done is not as progressive as you think.

"As a matter of fact, very little is being done behind the scenes. Unfortunately Hollyoaks' response seems to me performative and disingenuous.

"It starts within the work place. Systemic changes must be put into practice. Working at Hollyoaks is mostly positive, but the experiences I have encountered are a constant reminder of how difficult it is being a black woman in the industry.

"I am no longer standing for it. Putting out a podcast on racism and asking your black cast members to teach you how to tackle these issues is the bare minimum."

She ended her powerful speech by calling on her TV employer to "do better" and expressed her hopes that the soap will continue to tackle racism after the Black Lives Matter movement is no longer a "trending topic".

Rachel wrote: "THINK. DO BETTER. I hope Hollyoaks delivers the same energy when #BlackLivesMatter is no longer trending."