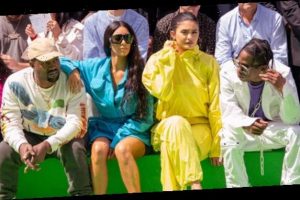 Father’s Day is ‘very hard’ for the Kardashian family, who lost their dad in 2003. However, the women are planning to seriously spoil the men in their lives.

The KarJenner clan have plenty to celebrate on Father’s Day! Although Kanye West, Tristan Thompson, Travis Scott, and Scott Disick are great dads to their youngsters, it’s also a “really hard day” for the family, who lost Robert Kardashian to cancer in 2003. “It’s one of the hardest days of the year for them,” a source told HollywoodLife exclusively. “Father’s Day is always a really hard day for the Kardashians and they like to all be together to support one another.  They will definitely post tributes on social and they all talk about him when they get together.”

The source added, “Kris Jenner tries to remain strong, but it’s also a really hard day for her as well. They all know he would be so incredibly proud of them.” Along with remembering their late father, the Keeping Up With The Kardashians stars plan to spoil the men in their lives. “Khloe will make it special for Tristan and Kim plans to shower Kanye from their kids. They all really like to do art projects with their kids so it’ll probably be something homemade.”

As for Kylie Jenner, 22, and Travis, whom she shares 2-year-old daughter Stormi Webster with — the Kylie Cosmetics mogul plans to spoil the rapper on his second Father’s Day. “Kylie always goes very all out when it comes to celebrations and gifts and she will definitely put in the same effort for Travis on behalf of Stormi,” the insider dished. “Out of all the Kardashians she seems to like to spoil the most and Travis’ Father’s Day will be no different.”