Home » Celebrities » How to Watch 'Hamilton': Stream the Broadway Musical on Disney Plus

How to Watch 'Hamilton': Stream the Broadway Musical on Disney Plus 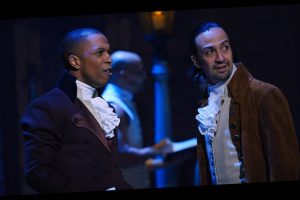 Hamilton, the smash Tony Award-winning musical by composer, playwright and performer Lin-Manuel Miranda landed on Disney+ on July 3 in a production recorded at the Richard Rodgers Theatre with the original 2016 cast, which includes Miranda, as well as Leslie Odom Jr., Renée Elise Goldsberry, Daveed Diggs and more.

Up ’til now, non-theatergoers have only been able to experience it via the official Hamilton soundtrack, which you can stream on Spotify and on Apple Music right now.

To watch Hamilton on Disney+, which is streamable to subscribers of the service, you can sign up for Disney+ here.

You can watch the Hamilton trailer, which Disney+ debuted the 2020 ESPY Awards on June 21, below.

That’s everything you need to know about how and when you can watchHamilton on Disney+. Additionally, fans of the service should check out more of our Disney+ guides, including the best shows to binge-watch, everything Star Wars you can watch on Disney+ and all the best movies the service has to offer. To take your love for Hamilton to new heights, try a Hamilton protective face mask.

Lin-Manuel Miranda spoke to ET’s Keltie Knight in June, just weeks before the Hamilton film was set to drop on Disney+, about giving access to the smash Broadway musical to the masses.

“It means everything because accessibility was so important to us, from those live Ham for Ham shows to the whole front two rows being 10 bucks… That was really one of the reasons we wanted to film this. We wanted to capture this moment in time, capture this incredible company — and we did it ourselves,” Miranda explained.

How did the Hamilton team pull off filming? Miranda revealed that they hit record on several performances to capture it from all angles — live performances on a Sunday matinee and a Tuesday, close-ups Sunday night and all day Monday on their day off and Tuesday morning.

“It is not easy to plan a film shoot while you are also performing eight shows a week,” he cautioned. “But this is the fruits of our labor. Now the world gets to see Hamilton with that company at that moment almost five years ago to the day. I’m really glad we got it.”

For what it’s worth, the filmed version will be censored to satisfy its PG-13 rating, but not as much as some may have thought.

For the Hamilton cast, having the opportunity to experience that special moment in time again is a dream come true. Miranda revealed on Twitter in June that he “gave literally two ‘f**ks’ so the kids could see it.”

“I already believed in the work we were doing and the way that I could honor that was to keep doing the work I was doing. As many superstars that you see on that screen, it was the most generous group of people you’d ever meet. It was about taking and it was about giving. It was really about setting your brother, setting your sister up for their moments too and supporting them,” Odom Jr. said. “When Renee looks good, we all look good. When Daveed’s moment pops and hits the way it’s supposed to happen, we all look good. I saw all that. I saw the give and the take. I saw the sharing.”

“We spin our wheels a lot on how to get more people into that show to the point where we were locking down a block of Broadway every other day to perform little snippets so people could get close to it,” Diggs said. “This is the best way we have figured out thus far to get people close to it and happening in a time where you can’t see it any other way. The theaters are dark, so I think it’s good. It’s special and I’m glad people get to see it.”

“Even when the script switched and we realized it was going to be an event in our homes to heal us through this quarantine, now we’re seeing that it is a light in a time of great pain and a need for revolution,” Goldsberry said. “I find it humbling because I’m a part of something that I have no control over. And that’s life, that’s real, you know? But it scares me still to this day when I’m thinking, ‘How can I talk about the greatest thing that ever happened to me at a time when I’m trying to be quiet so that the street can talk?’ I’m encouraged because I realize it is always OK to talk about art. Art is always a reflection of our life that will always lead us forward when it’s done in the spirit you know that God gives us. So I’m encouraged and I’m hopeful and always a little afraid. But this cast of people and the company of creators hold me up.”

Earlier in the year, at the 2020 Oscars in February, Miranda opened up to ET about bringing Hamilton to the big screen.

“I’m very proud of 2016 us, because we had the foresight to film the show with the original company before the principals started leaving, so we’ve got the snapshot,” Miranda shared. “I’m just really excited that we get to share it because we know how hard it is [to see it].”

Sign up for the Disney+, ESPN and Hulu bundle here.

Hamilton was initially scheduled to be released in theaters in October 2021, but after the coronavirus pandemic, Disney announced that the movie would instead be premiering on its platform in July.

Watch the video below for more on Hamilton.