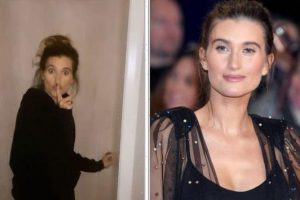 Charley Webb, 33, has taken to Instagram to express her feelings about suggestions that she should go on I’m A Celeb. The actress has responded to fan speculation on the subject.

Charley has replied to a Q&A, which she set up herself on Instagram stories.
The responses went live to her 539,000 followers.
The actress appeared to be bored and so posted a question on her Story posed to her fans.
The question read: “What do you wanna know?”

One anonymous fan asked Charley: “Would you rather do Strictly or I’m A Celebrity?”
The star responded with a clear bent towards choosing Strictly over I’m a Celeb.
She said: “I actually don’t think I could cope with the spiders or any other thing that moves.
“I couldn’t eat any of that hell either.

“Strictly I think is a lot of pressure, but… I would be hated in that jungle.”
She was then asked some other questions, too.
Another anonymous follower asked her: “Do you guys have a Christmas tradition? X”
Charley responded with a few photos and a caption.

The caption read: “We have a few.
“Christmas is my absolute favourite.”
Some of the pictures included a whiskey glass and a cupcake, a mini-nativity set and “Santa’s magic key.”
When asked if she’d be cooking Christmas dinner, the Emmerdale actress responded with a firm no.

She said: “Absolutely not. Also, we have a curry on Christmas day.
“I’m not a fan of turkey and we have a roast every Sunday so, it makes sense.”
Charley recently spoke out about how her house was flooded by her son, Ace.
The Emmerdale star announced that two-year-old Ace had “flooded” their house and that his behaviour had caused “horrendous chaos”.
“So the downstairs bathroom where he was washing his hands, he put the plug down on the sink and just left the water running.
“Obviously I was completely unaware that he’d done that.
“I knew he was washing his hands but I thought that he had turned the tap off.”