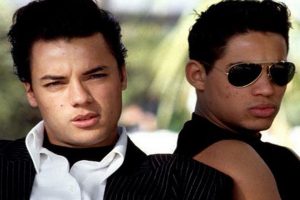 Iconic eighties male model and singer Nick Kamen has died age 59, just six years after his brother Barry passed away of a heart attack at 52.

Famed for his iconic Levis laundrette advert, Nick first found fame when he graced the front cover of style magazine The Face in a ski hat, lipstick and aviator shades.

Born Ivor Neville Kamen, Nick and his brother were part of 80's youth culture and key members of the Buffalo collective, a famed group of photographers, designers and artists.

Tributes have poured in for the Essex-born star after a friend of the family confirmed the news to the BBC. The cause of his death has yet to be revealed.

He famously stripped down to a pair of white Sunspel boxer shorts in a busy fifties-style launderette.

The commercial, which is still praised as one of the best campaigns ever, led to a huge increase in sales for the jean brand and caught pop legend Madonna's eye.

Madonna reached out to the model to collaborate on the song Each Time You Break My Heart, in which she provided backup vocals.

The song became a top-five hit on the music charts, and he went on to release the follow-up single, Loving You Is Sweeter Than Ever.

Sharing a throwback picture of Nick, he wrote: "R.I.P to the most beautiful and sweetest man Nick Kamen!"

Former Grange Hill actor Ricky Simmonds wrote: "I worked with Nick Kamen on one of my earliest jobs. It was a couple of years before he shot into the stratosphere, but even then – he had the aura and charisma of a superstar. Too young. RIP NK."

Singer Judie Tzuke wrote: "RIP Nick Kamen so sad to hear the news, he'll be with Barry now 2 beautiful brothers gone far too soon. such sunny happy memories of time spent in the Pink house back in the day."

Nick and Barry's ascent to stardom came after the then-teenage Barry met Buffalo's Ray Petri, who came into the clothes shop where he worked to borrow clothes for shoots.

He was taken by Barry's striking good looks.

It was from there that Barry and his brother became the stylist's model muses, forming the heart of the Buffalo collective.

Barry and Nick also worked with the likes of Vivienne Westwood and BodyMap.